I distinctly remember saying that I was just going to move in a few things to do the doors.  I opened up the tent, and asked Sally if she would give me a hand for a bit, balancing things and moving some small stuff.  Big mistake.  When Sally and I work together the "ON" button gets flipped and we put our heads down and work until the job is done.  Before you know it the tent was empty, and it was all in the shop.............in no particular order.  I have a much larger space....

It looks like an accident scene.  I also took 5 sheets of OSB from the garden shed and put them in the shop and we rearranged that too. 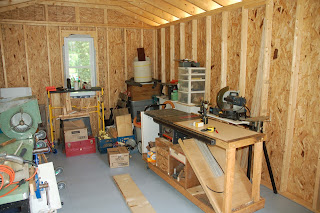 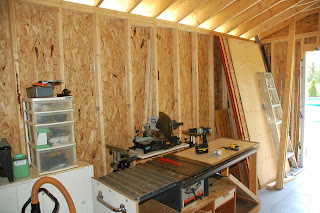 I puttered around a bit and put up some scraps to get a start on temporarily organising and getting some room.

I put the clamps up. The saws too. 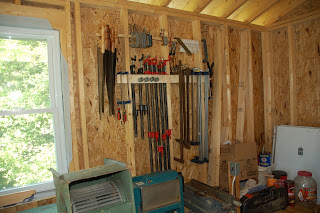 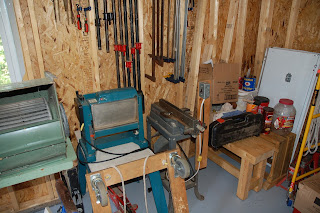 I also started hanging a few things on the wall 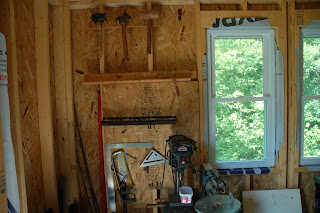 Hardly made a dent in it, but the work bench is almost clear.  I am positive things are not staying where they are.  That mitre saw and stand takes up far too much room for starters, but I will be needing it out for a while. 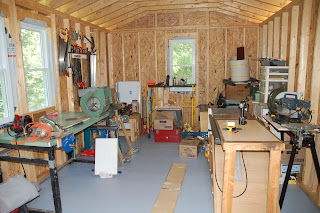 I think before I make the doors (because I need more room), I will be building a great big storage unit from some of the OSB and 2 x 4's to get things stowed away.

In the mean time, the weather guessers are saying there may be a bit of rain tonight.  I closed all the windows and blocked part of the door. 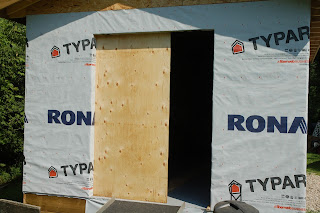 That will do for now, can't be any worse than the tent.  There is some rust issues on some of the tools from the few weeks (when did I start this?) they were in the tent.  I will have to deal with in the future.

So I guess there has been a slight alteration to the order things are getting done.  I didn't want to start installing things on the walls until the insulation and sheathing was done, but with the lack of storage that I didn't take into account, I don't have a lot of choice.  I guess I can no longer claim to have the neatest and tidiest shop around.  It was this morning!

We will keep going!