I started out in the late morning waiting for a delivery.  I had forgotten to order my top and bottom plates for the walls.  I put the shingles, ice/water shield, and ridge vent on the order too.  While I was waiting, I went over to a neighbours place and asked if he would like to come out and play.  He said sure, he would be over right after he had a bite to eat.  I went home and laid out some wall studs on the decking. 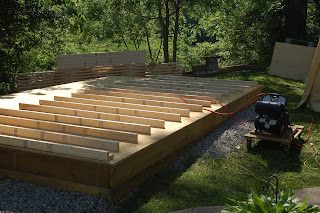 With that done I built the corner of the wall so there is something to nail interior sheathing to.  There are a few ways to do this, but I prefer a simple 2 stud corner. 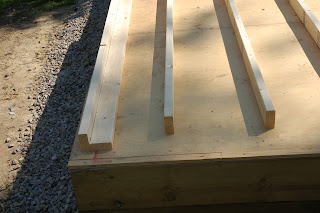 This is the south wall and is the easiest.  Just straight framing from end to end.  I looked at my pile of lumber and thought it went down a bit faster than I had expected.  I did some quick and rough calculations, and I realized I needed more 2 x 4 studs.  I went in and gave the lumber company a call and sure enough, the truck had already left.  As I hung up the phone I heard the truck coming.  I figured that I would have enough for the day, and I will go in tomorrow and get some myself.  The car carries 8' lumber pretty handily for a small car.

So, anyway, we get the truck unloaded and I mark a set of top and bottom plates, and my neighbour shows up toting his own framing nailer and his tools.  Some of the lumber had a bit of twist in it, but by wrapping it with a ratchet strap and cranking it together we got it all together and started putting on the 7/16 OSB sheathing.  Making sure everything is square as we go.

Oh, all the studs were checked and marked for crown again.  The crown goes up again, so it faces the outside when the wall is up.  This makes it much easier to put a level on the inside of the wall, hitting at each end, instead of rocking on the hump in the middle. 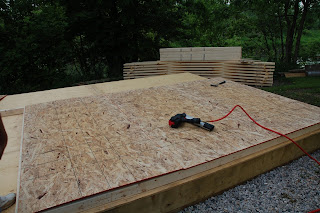 Then it was just a matter of hoisting it into position.  While we held it in place, Sally put in a couple of screws into the pre installed braces. 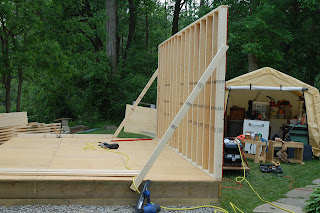 That is as far as I expected to get today, but with the extra set of hands making it easy, we carried on.  Before long we had the south wall, with the pre assembled widow framing done, and the east wall, also with window framing.

The short east wall we found it easier to sheath with it up.  We also had to use the 2 braces on that end to have enough studs.  So, without any more studs, we decided it was a good time for a couple of beers and call it a day. 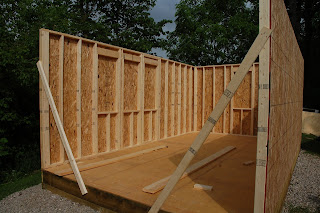 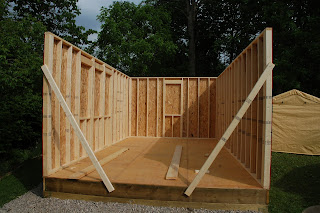 I think it looks great!  A bit small, but I will make it do.  I am really pleased on the way I planned the window location.  I plan on having my work bench in front of the bank of 3 windows (I want to build something Rouboesque for that spot).  The back wall will be another work place where I can sit and solder and such.  I think I want to make that wall almost all cabinets for tool storage and such but I will let it develop as I go along.

My neighbour is a joiner, having apprenticed in Scotland, and was a big help, as I have not done anything like this for a long time.  I would have never got this far today without his help.  I offered him the job of doing the roof, and I think I just saved myself a lot of labour.  I can't do the ladders and my balance is not very good, not a good combination on a roof.  So he and another guy will get it done for me.  I have to pick up a few extra odds and ends for him, but there is a point where you have to concede to a more able and skilled person.  Sometimes for your own safety.

So that was my day!

Thanks for dropping in!
Posted by Watertone Workshop at Thursday, June 04, 2015