Another job done that makes a big difference.

I went out today and bought myself a new staple gun.  Pretty much the same thing that the last one was that lasted over 12 years.  I bought a bunch of electrical supplies too and ordered some more.  Still have to search around for some stuff like the main feed line and conduit and I really need to get an electrician in to look at things and get some advice.  I have a pretty good idea of what is involved, but I do need a qualified eye to look things over.

But that's not what this entry is about is it?  We have windows.  I started out by cutting the house wrap in a big X corner to corner in the window opening. 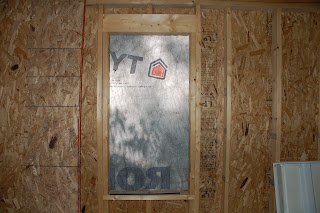 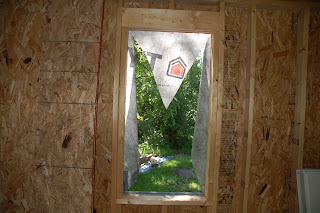 Then I pulled each of the triangles to the inside and stapled them. 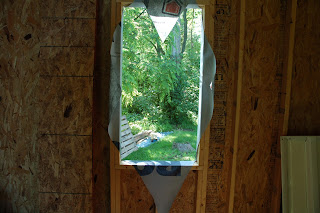 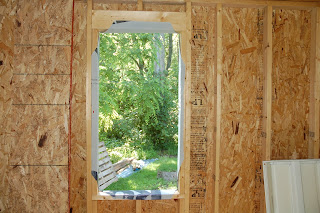 Now the holes need to be filled.  Everything fit quite nice upon testing and I had Sally come out to give me a hand, standing inside with the level and making sure everything is spaced even side to side.

I have some tripolymer sealant that gives you cancer if you live in California and put a bead across the top and down each edge.  I left the bottom dry so any moisture has a way out. 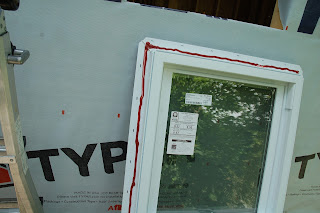 The instructions say to have a 3/8" gap on the bottom (the whole rough opening is only 1/2" larger in each direction) so I cut a shim on the table saw and set it on the sill.  Then hoisted the window in from the outside and set it on the shim. 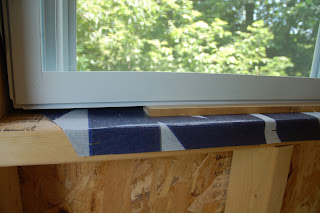 I then nailed the top of the nailing flange to the wall, through the sheathing and into the framing members with 1 1/2" galvanized roofing nails.  I followed the recommended nailing schedule, putting a nail in every second hole.  They say to do it like siding, not smacked right in tight, just tight enough for the nail head to contact the flange. 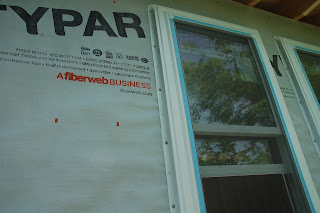 After all the windows were nailed in place I went back and covered the side nailing flanges with Tuck Tape (house wrap tape). 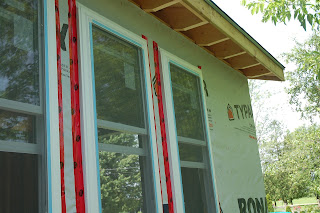 and then put a strip across the top, again, leaving a way for moisture to escape at the bottom. 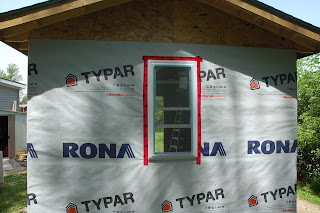 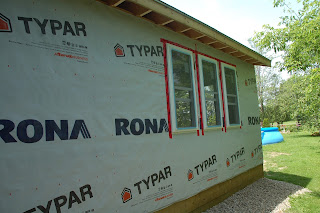 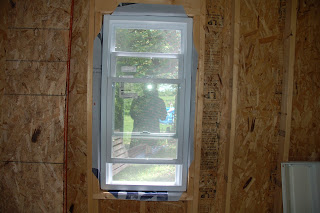 The small gap around the perimeter will eventually get some foam insulation sprayed in there.  Another thing I found out, and you can see it in the photo above, is that the windows are double hung units instead of the single hung I thought they were.  That is nice!  I have the choice of opening the top or the bottom of the window, or both.  The shop has windows nicer than most of the ones on the house.  Sally and I both think we will go back to the same place and buy 4 windows for the house and replace the garbage ones we have.

After I was done putting in the windows, I swept up a bit and put a bunch of stuff away.  There are a few things in there to move out still, so I can get to the next job of painting the floor.  I have a bit of sanding to do here and there on it, but that will be next.  The weather guessers are saying we might get a good rain storm tonight, so we will see if I get at painting tomorrow.  Maybe just more prep work if it rains.  Once the floor is painted I can move a few things into the shop and make the doors for it, and once the doors are in, I suppose I can put everything else in and get rid of the tent.  I am really looking forward to that.

So until I get more done...

Thanks for dropping in!
Posted by Watertone Workshop at Monday, June 22, 2015