Not much a guy can do on his own at this point, but there is always something.  I grabbed the last of the 2 x 8's (I ordered the right amount of them!) and made up the ridge beam.  I also marked, on both sides where all the rafters need to be on it.  The saw benches came in handy here.  I used two 2 x 6 off cuts for the joint and put it together with construction adhesive and 3 1/2" deck screws.  I measured the top of the walls before cutting it to final length and I am right on 12' wide and not quite 1/8" over the 20' long mark.  When I got that done I set it aside with some scraps under it to keep it from sagging.  It sits on the sill plate at both ends, naturally. 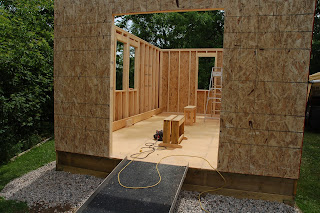 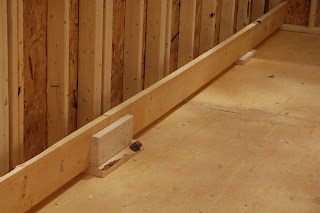 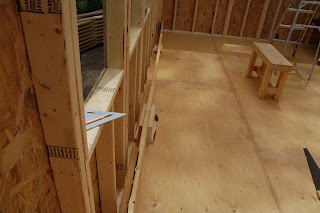 After that I figured I would make a bit of a "helper" for putting up the end rafters.  I took some scraps of OSB and framing members and made this. 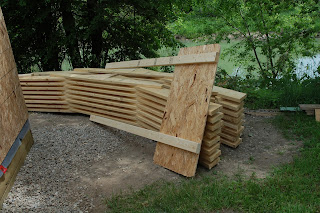 I leaned it up against the wall 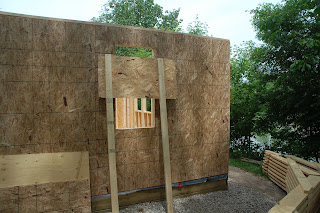 I hoisted it up into place, letting the OSB hook over the OSB on the wall.  I then screwed the assembly to the wall. 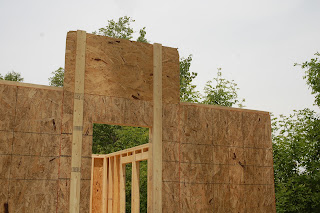 I did something similar at the other end. 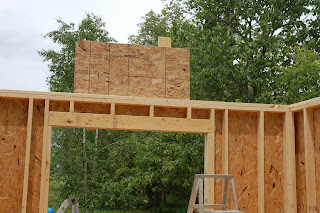 Now when the rafter assemblies get flipped into place they won't keep going over the other side of the wall.  The OSB is also on the same plane as the exterior sheathing that goes on the rafter, so it is also a jig to ensure placement somewhat.

I am not sure where I saw this trick.  It could very well have been on one of the several You Tube channels I follow.  Most likely Pa Mac at the farm hands companion.  A wonderful and folksy place with a good deal of gentle humour.  I believe it may have been his pole barn build that it is in.

After that is was some clean up and getting a couple of rafters staged up to go in.  I am itching to put them up, but I am taking the rest of the day off.  I need the break. 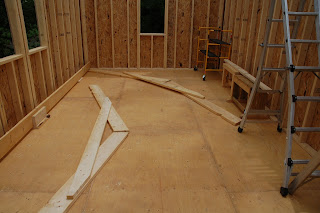 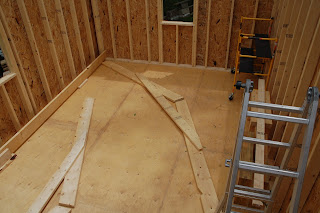 As always, I appreciate you following along.