Happy Fathers Day to all the dads out there.  The most difficult and sometimes frustrating job in the world, but also the one that is most rewarding.

Fighting the aches and fatigue from the roof job still.  I am not cut out for that kind of work any more.  Still, there are lots of things to be done, so I wondered outside and tried to get a start on putting the house wrap on the shop.  I started in the back corner, where the ground comes up the highest and would give me trouble with the length of the roll (9' high).  I started by trying my electric stapler but, wrong staples, so I had to go to the old manual one.  I made sure I got the top corner nice and worked my way down the finished edge of the sheathing.  I rolled a bit out and started putting in staples across the top.  Of course, the roll kept falling over, so I got Sally to come out and hold the roll while I worked. 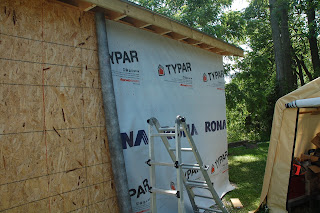 Much easier that way, soon I had the whole south wall done. 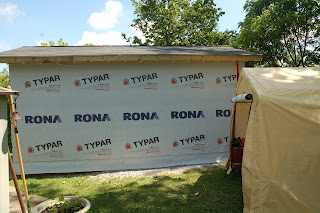 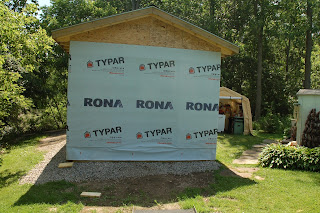 Then did the same for the last 2 sides.  I over lapped the seam by a couple of inches and sealed it with "Tuck tape" as we call it.  It is made for house wrap and vapour barrier.   I then went along the bottom of the sheathing and stapled it all down.  Then just under the sheathing, I stapled it to the rim joists, then trimmed off the bottom.  Of course, the staple gun died near the end of the job, so it could use a few more. 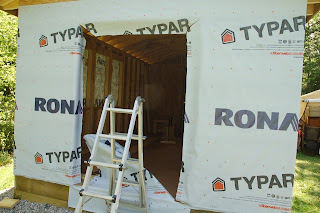 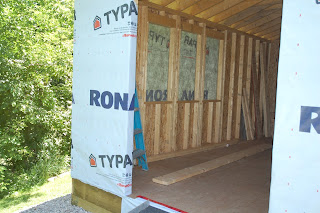 Then put the ramp back.

So with that all done, I was going to call it a nice easy day.  Then I saw the light fixtures I just bought.  I got them at the Habitat for Humanity ReStore.  A great place and the money all goes to help others.  I bought 4 T8 fixtures, 4' long, that each hold 4 32 watt tubes (yes, that is a lot of numbers).  They cost me $75 for all 3 and that is cheaper than the least expensive 2 tube units I saw.  Upon further inspection, I found that one of them is a 3 tube unit, oh well, they have the diffusers anyway, and I don't think you will be able to tell.  I am going to put 6500K daylight tubes in them.

Sidebar:
6500 kelvin (which is a temperature) describes the light colour.  Common bulbs (warm white) give off a yellowish hue and are around 3500 kelvin, as the temperature number gets higher, the light gets bluer (cool white).  So, backwards to what intuition would reason (higher temp is cooler colour).  When the colour temperature starts getting to 5000K and above, they are starting to get to the hue of natural sunlight.  The 6500 are called "daylight" bulbs.  I prefer them in my house too, but in the shop, the cold light will show imperfections more readily, and, I find, are much easier to see under in general.  The best way to inspect anything is under natural daylight, and these come the closest to it.

So, I have these 3 units sitting on a floor that will need to be painted soon.  I wonder how hard they will be to put up.   Quite an ordeal as it turns out.  I did some thinking and experimenting and I ended up throwing a rope over the collar ties and tying each end to the light.  I did some preliminary work, drilling holes and measuring out where they ought to land on the collar tie, and marking the collar tie.  Then with the rope over top of 3 collar ties I went up and grabbed the rope in the middle pulled.  I made sure it went up sort of level, but up it went and when I had it kind of close to where it needed to be, I grabbed the drill, with a Robertson screw all ready on the screw driver tip, and drove it through the pre drilled hole and into the little x I had put on the collar tie.  The second one went in the same way and with the middle screwed in, I could let go of the rope and then drill and screw into the other 2 collar ties.

I am not so sure about this method, but it worked for now.  The light has to come down for sheathing and insulation, but I would like to get my electric permit signed off and then start on the other jobs.  Once I am powered, more options open up.  But yeah, it looks OK up there. 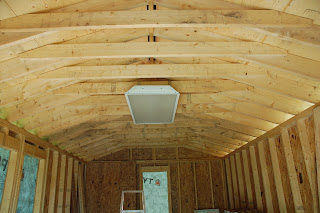 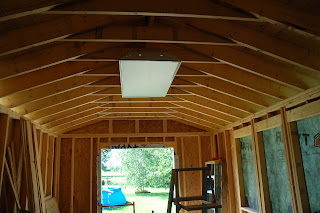 It could be possible to throw a wire with a plug on there and plug it into the extension cord the previous shop lived on for 10 years too.  That opens up possibilities too.

So, that was my Fathers Day.  Despite the aches and pains, progress has been made.  A bit at a time and we will get there.  Window day soon!

Thanks for dropping by!
Posted by Watertone Workshop at Sunday, June 21, 2015