It was supposed to rain yesterday, but didn't.  I took the day off, relatively speaking.  I did some cleaning and organizing in the shop, but for the most part, relaxed.

Today Sally and I got out there and put the first coat of stain on the remaining two walls.  I am going to have to get some more stain, the rough textured wood is really sucking it up.  My arms and shoulders are like lead weights right now.  A combination of working over my head, being up a ladder and maintaining a death grip, and rolling on the stain.  I think it has been a while since those muscles got much exercise.  But I am really pleased with the end result.  The second coat will even it out and make it look just that much better. 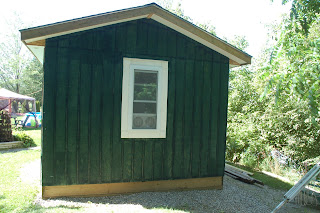 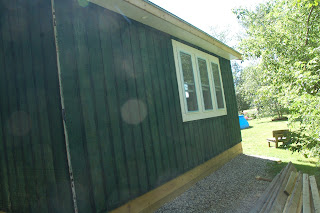 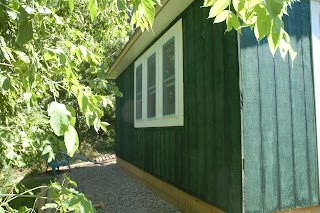 The next job will be to pick up some more lumber and make all the trim, stain it with two coats, and install it.  Then the second coat on the walls, touch up the white, caulking and the outside is done!  Well, except the doors.  I am thinking some lathe strips on it (including one to cover the seam where the doors meet) and making them green also.  All the weather stripping I bought is brown.  I picked it up before I found the deal on stain so it figures that I ought to have got the white stuff instead.  Oh well, it will work.

I forget if I mentioned that our washer/dryer died last Sunday.  It beat itself to death pretty badly and left parts, rusty metal, and water all over the place.  We had to go buy a new laundry centre and that broke the budget for the electrical work.  We are putting it somewhat on hold until next year.  I will pick away at some of it with the stuff I have on hand but it won't get hooked up until the finances recover a bit.  Kind of a downer but I still have a place to work that is a lot nicer than before.  It won't be long until I will be able to start on a few wood working projects in there, and that is what the whole point of building it is.  A shop is never really finished any ways.  It is always changing with developing work flow and changes in equipment.  Next week is the yard sale, and things will be moving around already, as soon as the space is free.  I love being in there, it is taking on a comfortable inviting vibe and as it develops I hope to make it even more so.