Got out this morning and started cutting in the exterior stain.  I wanted to get the long side done before the full sun started hitting it.  Lucky gut that I am, Sally came out and gave me hand doing some of the brush work while I rolled it on.  It went fairly quick with her help, so I moved around to the front and got a coat on that too.

This rough textured board really soaks it up.  I went through almost a gallon and a half just getting these 2 sides done.  Good thing I ordered lots, there is still a second coat to do, but I imagine that the second one won't take quite so much.  Once the 2 sides were done it was getting much too warm for much else, so we packed it up and hit the pool.

The more I look at the colour, the more I like it.  It is called, coincidently, Loon Collar.  I may do the doors in that colour too, I haven't made up my mind yet.  Still a bunch of trim to make, stain green, and put up too.

I got in contact with an electrician, and he will be dropping by next week.  I am hiring him to consult and to check my work over, and to source the main feed line.  I want to finish the outside before I start the electric work, and our yard sale will be on August 8th, so I hope that will free up some space.

In other unrelated news, the car needed $200 worth of work to replace a rusty fuel line.  I was worried when it started reeking of gasoline.  Then, last Sunday, the washer/dryer unit decided it would be a good time to beat itself to death, leaving bits of parts, rusty metal, and water all over the place.  A trip to the local Scratch and Dent store, and $1000 later and the new one got delivered today.  Now Sally has a ton of laundry to complete, along with every towel in the house from sopping up the mess, and of course, re washing what was in the machine upon it's untimely demise.

But lets concentrate on the good stuff shall we?  This is coming along better than I had hoped. 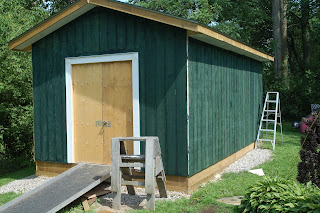 Once it gets the second coat and all the trim, it will look great!

One other thing.  Sally bought some "camp fire" sized marshmallows.  Lil' Lee won't eat them, but she thinks they are a neat toy. 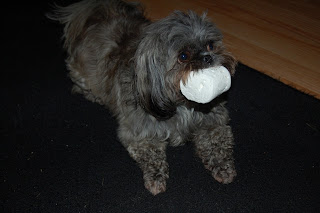