A short day again today.  I spent more time ripping and staining the rest of the soffit over the last few days.  I had my neighbour come over and give me a hand for the whole hour it took to put it up.  I also added a couple of details to dress it up.  The first, which was suggested by my neighbour, was a piece over where the fascia joins at the peak. 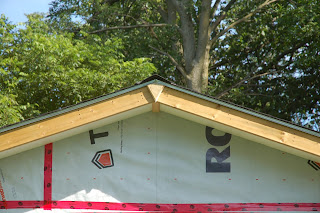 It is a small detail, but I think it really makes a nice addition. 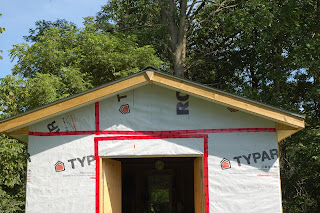 The second little bit is at the peak where the soffit meets. 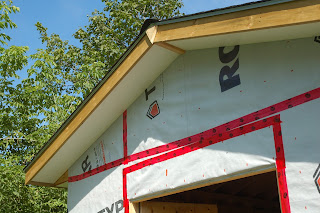 There is a perfectly logical reason why I put that piece there.  I measured wrong.  I did the measuring before my neighbour came over and while my knees were knocking in fear up the ladder, I messed up.  Then I cut to that length.  It just happened by chance that I had a piece in the cut off pile that had the proper width, and rounded edges.  I fit perfectly and, I think, looks better with it than if I had cut the right length and just left it as originally planned.  I am putting it down as a "it was meant to be" situation.

In other news, the local Rona had stain on sale.  We could not get exactly what we had in mind so we changed direction on the colour.  We ended up with a colour called "Loon collar".  Which is again, the cosmos directing things considering the logo I use for the Watertone Workshop.  It is a very dark green (I got my green!) semi transparent stain and I got enough to do 2 coats on the whole shed.

A whole hour worth of work to put up the soffit and then we kicked back and had a couple of beer and chatted about our favourite genre of music.  Mainly blues.  Turns out he is as big a fan, perhaps more so, than I am.  After imbibing a few, there is no more work for the day, which is just as well, I seem to be lacking a bit in the energy and motivation department lately.  Now I have a clear path to putting up the rest of the siding and getting it stained, that and the trim will complete the outside pretty much.  At least for this year.  Weather tight and pretty, what more could you want?

Thanks for dropping in!
Posted by Watertone Workshop at Thursday, July 16, 2015