I added a warning to the last video I posted.  I foolishly cross cut my pieces without a sled and with a long length of wood on the non fence side of the blade.  This is dangerous.  You can easily get a kick back on the saw and was a dumb thing to do on my part.

That being said.  I am going to leave it up, with the warning edited in, as a show of what not to do.  I do not portray my videos as instructional in any way, they are only entertainment.  But I do not want someone copying this action.

Now, onward.  I did get some more video editing up today on the trio of photo boxes.  I was trying to figure out the best way to flush up all the fingers to the sides and eventually got it.  Then I proceeded to cut the tops off the boxes.  They are still sitting in the shop like that while I have been working on the spice rack in cherry.  I have been using the Paul Sellers method of creating a "Housing Dado", also known as a Stopped Dado.  Except I do it with much less speed and talent.  I busted out a chunk of wood yesterday and then again today on the bottom piece.  So I had to stop and glue the piece back in and wait for the glue to dry.  I kind of gave up for the day after that happened.  What I do have complete fits pretty well though.  I did pretty good on getting the fit nice and tight on all 6 joints and test fitted them together. 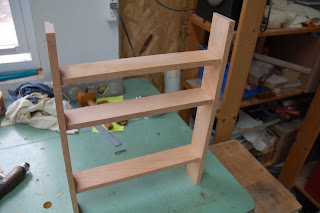 After that I marked for the little piece that has to be removed so the front faces line up flush. 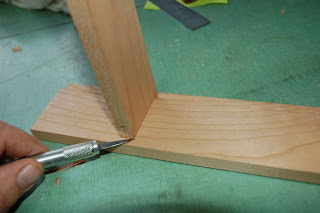 Then cut that little piece out and keep checking until happy with the fit. 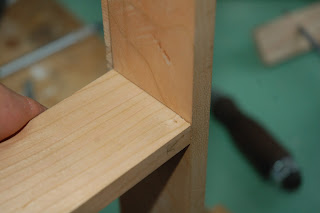 There are a lot of markings to keep things sorted out on the wood, but it is going along OK.  Except of course, the breaking out of the chunks on the bottom that I have mentioned.

So, I took the bottom into the house and glued the little piece back on and decided I would edit some more video.  More on the photo boxes, this time figuring out the best way to trim all the fingers of the joints flush, and splitting off the top.  I am getting to like the wood direct off the plane instead of how it looks with sanding.  It is not as messy either.


I hope to get the hinges on tomorrow.  I could have given it a shot today, but I just was not totally in to it today.  I lost some ambition with the breakage.  So, until next time.....