A bit about bits

I posted a new short video on You Tube.  I bought a set of router bits that were a store brand when they didn't have what I wanted there.  They were advertised as carbide edged, and they were.  The shanks must be pretty cheap steel though as it busted below the cutters.  I was not impressed.

The folks at the store are good people and they refunded me with no problem.  I ordered a Freud bit and it should be in tomorrow.

Now, don't get all anxious about my safety, or lack of it.  The bit does not cut through the wood and the wood covers the bit.  I usually use a push pad, but in this instance, the feather board is thicker than the stock.  I did try on a piece of scrap when I was setting up, with pads and no feather board, but the piece wanted to jump around off the fence and if it did the bit would then be exposed.  So I decided that the feather board holding the piece in place was the safer way to go.  More control was, in my opinion, a lot safer.  Others may choose differently, and I would not argue with what they feel more comfortable with.

This morning I got up and wondered what I would do, as I wait for the new bit to come.  I went out and cleaned up a bit and as Sally wants a box to put photos in, I decided to get a start on that.  I messed a bit with some paper and pencil trying to get it to look right, but could not get what I wanted.  The proportions I needed, along with the thickness of the stock just was not working in my head and eye.  So instead I divided the project up.  I took one of the ash boards my friend dropped off to me and cut it by hand to rough lengths, hand planed the cup out of one side, and milled it on the thickness planer to 1/2".  I then jointed one edge, then ripped it slightly over sized on the table saw.  I then took the wood and cut it to the lengths I needed, keeping track of the order they were cut.

Again I got to use my box joint jig, and cut many of them.  I kept the order of the board in tact so that the grain follows the box around, except, of course, the last corner. 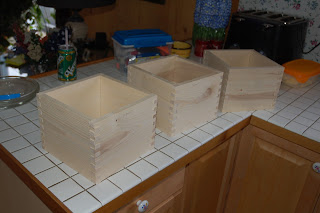 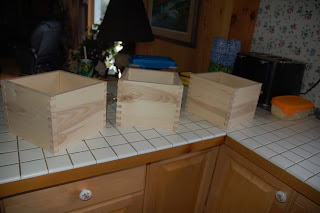 There is still a lot of work to do, but I think they are coming along nice.  Again now, I am waiting on the router bit.  I have to cut grooves on the inside to hold the top and bottom panel, much in the same way the maple panel is in the box in the previous post.  Once this is done, I will sand the inside faces and glue them up with the top and bottom panels, making a cube.  After that it will just be a matter of running the box through the table saw, releasing the top from the rest of the box.  I will be using hardware on these for the first time.  Some hinges and maybe a knob and there could be some sort of lid stay put on too.  I really have not made up my mind.  All four of the boxes will be getting the oil and wax finish.

All of these could find their way under the Christmas tree this year, and I am having a bit of a dilemma on what to post and where.  I don't want to spoil the surprises, but it is what I am working on and if I don't post about it, I have nothing to post.  Hopefully close friends and neighbours will not read my blog....lol.  That must be a first.  A blogger NOT wanting someone to read his musings.

Anyway, until next time

Thanks for dropping by!
Posted by Watertone Workshop at Thursday, November 05, 2015