I have had this one made for a while now.  I just never got around to posting it.  I have lots of footage to edit and put up but I have been spending time in the shop and gathering more instead.  I had to make some more top and bottom panels for a series of 3 boxes sized to hold some photos.  These are going out as gifts for Christmas.  I am having fun building and learning.

I got some time in the shop yesterday and today doing almost all hand tool work.  It is such a nice time doing it.  It was warm yesterday, but this morning was pretty cool, right around the freezing mark.  I fired up the heater and cracked the window for ventilation.  I have also suspended an inexpensive window fan to the ceiling joists, blowing down.  This helps a lot.  It was not long before I had to turn the heater to low and take off my coat.  Shortly after I just shut it off all together.  It will only get better as I add insulation over the winter.

I have a few builds on the go at the same time right now.  I also have some plans fermenting in my head for at least one more.  I am racing the Christmas dead line and I don't think I will get all of it done by then.

I had a centre punch come in today at Home Hardware.  It will be really handy for installing the hinges on the boxes and in other areas. 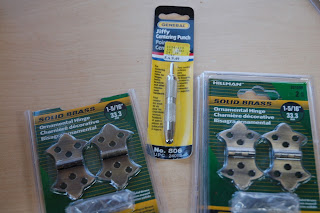 You simply set it on the hinge hole and tap the pin at the top and you get a mark right in the middle of the hole.  This should make installation much easier and more accurate.

Also, in some yummy happenings, Sally made her first Chelsea bun today.  It tastes wonderful and brings back lots of nice memories.  My Mom used to make it every year.  Sally really out did herself on this one. 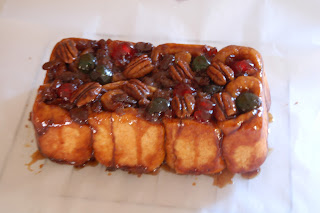 About half of it has been enjoyed already.

Well, I have tons of work and miles of video to edit, so until next time