Another video, despite Microsoft

Well, I have come to the conclusion that the biggest thing Mac computers have going for them is Windows 10.  I am not pleased at all with the intrusiveness I had to take off of it (there are several web sites that tell you how to stop Microsoft from gleaning so much personal information about you), and I am really not happy with how it handles uploading photos and video, but most of all.....Windows Movie Maker has fallen by the wayside.  They now have "Live Essentials 2012" which is supposed to have a newer, compatible version of Movie Maker, but it freezes up constantly on my computer.  I was with Microsoft Support 3 times trying to get it to work right.  Using live chat and going to the point of allowing them remote access to my computer.  The third time I got told that Movie Maker is no longer supported and they will not do anything for me.  Here is a screen shot of part of the discussion with the support person telling me it is no longer compatible. 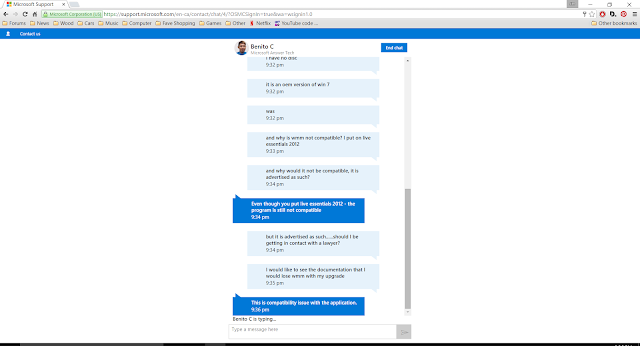 I don't know how many times and hours it took to edit the first seven minutes of the video.  But it was extremely frustrating.  Of course, support suggested I could go to the "app store" and purchase something else from Microsoft.  Well, I already had something from Microsoft, and it worked up until my upgrade to Windows 10, and now they mess it up so they can sell you something?  Not likely.

I have downloaded a new editor.  A free version of a program called Lightworks.  It was suggested to me by Jason Beams, another You Tuber and a friend from a live IRC chat that I know.  I hear it has a steep learning curve, so it may be a while before I am comfortable with it.  I guess Microsoft does not, or can not, want to compete with the Mac computers which are supposed to be so easy to make videos on programs built right in.  Too bad, the average person had a handy little program and Microsoft took it away.  Just another case of the big guy deciding on what the average person wants without even asking or paying attention.

In other news, we got pretty much dug out from the weather.  I am still aching.  Yet somehow I managed to install a bit more insulation in the ceiling of the shop.  I got the vapour barrier up too and a part sheet of the same siding I put on the exterior of the shop up too.  It isn't painted yet.  That will need warmer weather.  I have lots of video to edit on that.

Well, I guess I will put the results of my battle with Movie Maker.  I did finally get the new video all done despite freeze ups.  I am using an older version that I downloaded and struggled through it.  It took most of the day.  So, I hope you enjoy the video, the fourth part of "A Board of Cherry" in which I am building the essential oil cabinet for my son's Christmas present.  This is turning out to be some sort of opus, but it turned out to be a labour of love and I really got into it.