I have done my share of relaxing though.  Just sitting back and taking it easy.  With the heat and humidity, it kind of makes it mandatory.  We have had visits with kids too, and working on another project with  my son.  Not doing a video on that though.  So it has been nice not having to worry about cameras or the story and the lights.

It is August.  I suppose we are about to be inundated with back to school ads now.  They always seem to rush these things.  Dang, let's just enjoy the summer instead of worrying about next month.  That is exactly what I am not doing.....lol.

Today we had the heat delivered.  It is time to think about the winter and get ready for the cold months.  I called up the guy I get the slab wood off of and had 2 truckloads delivered.  This all comes from a fairly local Mennonite operated saw mill.  It is all the slabs and wonky wood that is left over from the milling process.  The waste.  So, recycling and making complete use of a resource.  The mix of wood changes from year to year.  2 years ago when I last had it delivered it was mostly maple, 2 years before that it was oak and walnut.  This year it is mostly maple again, with a good deal of oak, and a bit of walnut.  I confess that a few pieces of walnut are already in the shop.  It all has to be moved and stacked yet, as the guy just left. 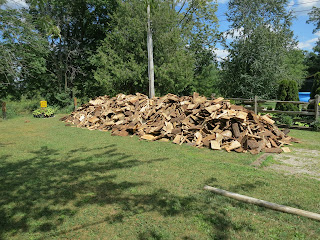 Seems I order every 2 years and that keeps the house warm for both winters.  It is a good deal and we save where ever we can.  We got a really good deal this year.  The guy that used to deliver for him had a huge box on the truck that held 30 yards.  Now he advertises as $20 a face cord, but I have figured it that he is calling a yard a face cord, which by most practical means is a little shy for size.  But a face cord is not a regulated size, so you can call whatever you want a face cord, technically speaking.  Never the less, it is still a great deal at that price.  So, a truckload of 30 yards cost me $600 plus $50 delivery.

The guy he has now has a 20 yard box, but because I order regularly, and ordered 2 loads, he gave it to me for the same $650, delivered.  This should heat us for the next 2 years.  That is only $325/year and I know some folks who pay more than that for a month during the cold months.  Not only that, but if the power goes out for any length of time or some other such thing happens, we have the ability to keep warm and to cook if needed.  We also have a bit of room if someone is in need.  So we will probably have company if something does happen.

Thing is, as I said, it all has to be moved and stacked.  So there is some more heat events involved.  We did a tiny bit of it, then fell into the pool.  It is about 32 degrees C and the humidity is at about 84%.  So it is going to take some time.  Oh, and my knee is killing me despite putting on the brace.  It does not have to be completed until the fall rains come in October, so I think we will make it.

In other events, I do have a couple of videos planned.  Well, at least plans to video a couple of things I want to do.  I have to get Sally's coffee table made.  I think I posted about the wood I got at a mill a while ago.  3 ash slabs, a full 2" thick.  I am not sure on a plan, but I am getting a handle on the size, and I will just wing it from there.  Both edges are live on the slab, so in order to rip them I need a saw guide for the Skilsaw.  That will be a video in itself, before I start the coffee table.   The size has to be wide enough so my laptop, and mouse, and cup of coffee to sit across it, and long enough and in proportion for Sally's laptop, mouse and cup of coffee.  As it will be used for the laptops, it will be a bit higher than most coffee tables, and Sally does not want any stringers at the bottom because she wants the dog to be able to walk under it.  As if she ever will.  That dog is cute, and I love her to death, but she does not have too much of the brave gene in her under most circumstances.  She will chase a squirrel, but she won't walk on the rug over the heat vent in the floor.  But anyways, that is the idea of size I have.

Now, no one slab will give me that size so I have to join 2, edge to edge, and since they are sequentially cut from the same log, I plan on a bookmatch on the top, a plain rectangular shape, with rounded corners and rounded edges.  I may just mortise in some legs and leave it at that, perhaps a taper to them, we'll see.  Oh, the legs have to sit inboards a bit to reduce toe stubbing too.

I have a Scotch Bonnet pepper sitting on my counter that I just picked from the garden.  I like food a little spicy, buy I am having thoughts about trying this thing.  The garden has been somewhat of a success, tomatoes and lettuce are good and are feeding us with tons of flavour.  We have had a few cucumbers and they were great.  The radishes were few, the peas an almost fail, and I don't think the runner beans are going to do much.  The peas, cukes and beans I put in boxes on the south side of the shop, and with the heat this year, along with the shop being dark green, I think it was just too much for them.  But the tomatoes....the tomatoes.....we planted a variety of small ones called Million, and what flavour.  They are so good.  Almost too much tomato flavour.  They are great!  The first beefsteak is almost ready to pick, but not quite.  The variety we got was "Beefmaster" and we are hoping for some nice tasty treats from it too.

Well, I only really meant to put in a short paragraph of the wood being delivered, but here I am, blathering on like an idiot.  Again, I hope you are enjoying the summer, and, until next time......

thanks for dropping by.