The player I did the telecaster for in my last video needed work done to another guitar.  This one is a Wayne's World Squier Stratocaster.  If you have seen the movie, you know the one.  These were pretty inexpensive guitars, but well done.

This particular unit has been refinished.  Originally they only came in white.  The previous owner stripped it and stained it.  Since then it has had the pick guard replaced with a tortoise shell look one and the pickups have been replaced with Seymour Duncan Hot Rails, the owners preferred pick ups.

These guitars, like I said, are a great value.  They are easily identified by the neck plate. 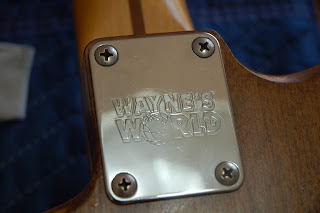 The bodies are made from basswood.  Not a traditional "tone wood" but it has become popular since Eddie Van Halen had it used for many of his signature models of guitars.  It is a bit soft, but has proven to do the job and it is light.

This one only needed cleaning up, new strings, and a set up.  A bit of finish repair and a scratchy input jack.  Of course, the frets needed cleaning up too.  Something I take great pride in is making the frets look beautiful.  It takes hours of work to get them how I like them, but it satisfies the OCD part of me when you can see the reflection of the strings in the frets.  All the divots and wear are taken out and they shine like mirrors. 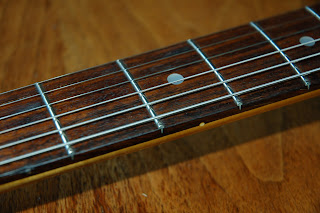 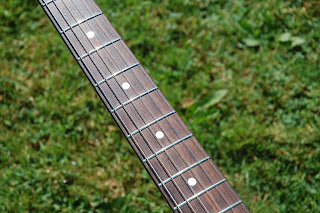 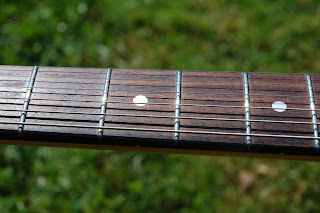 I took the time to get the process on video.  That will probably be the next one I release once I get around to editing.

I have a coffee table I have to make for Sally, and I keep promising it will be next, but other things keep popping up.  This project jumped ahead in line, and now I have a neighbour that needs a deck post replaced ahead of the coffee table too.  Of course, we are still moving wood to a stack too.  It is almost done though.  I will get caught up and get to a build video eventually, but until then, I am keeping busy enough.  The humidity has been terrible, so some days are just spent trying to endure that.

Thanks for dropping by.