Let's keep all of this dry now

Hello and welcome back.

Our little adventure now brings us to 2008.

Yes there was a 2007 in there, but nothing much happened to the home that year.  It was the year I had a career ending injury to my knee, tearing the miniscus and having a DVT develop.  The DVT required blood thinners which delayed surgery.  When I did eventually get the surgery it made things worse.  So now I have chronic pain and phlebitus for which I need a compression stocking to keep the blood flowing.  There is enough damage that I cannot balance on that leg alone with my eyes closed.  The signals don't move fast enough.  The injury also caused some other issues with my difficulty in accepting the situation and circumstances.  I still have days when I struggle with it.  I don't really like talking about it.  I used to run CNC machine cells that cost millions of dollars, now I can't get a job at the corner self serve gas station.  It gets to you some days.

So 2008 we figured it was time to get the new roof on the place.  A lot of work had been put into it and we did not want to risk any water damage.  When I fixed the roof over the bathroom I found that the trusses were set 24" O.C. and were covered with 1/2" OSB with H clips between them.  Within code, but it sure was a bit springy to walk on.  The insulation was OK, but was suffering from a lack of venting above it.  I intended to fix all that, and have the new roof built my way.  I had to hire out the job, and a young fellow and his crew showed up on time and started peeling away the old roof.  The plan of attack was to re structure one side one day, the other half the next day and shingle on the third.  Off to work they went. 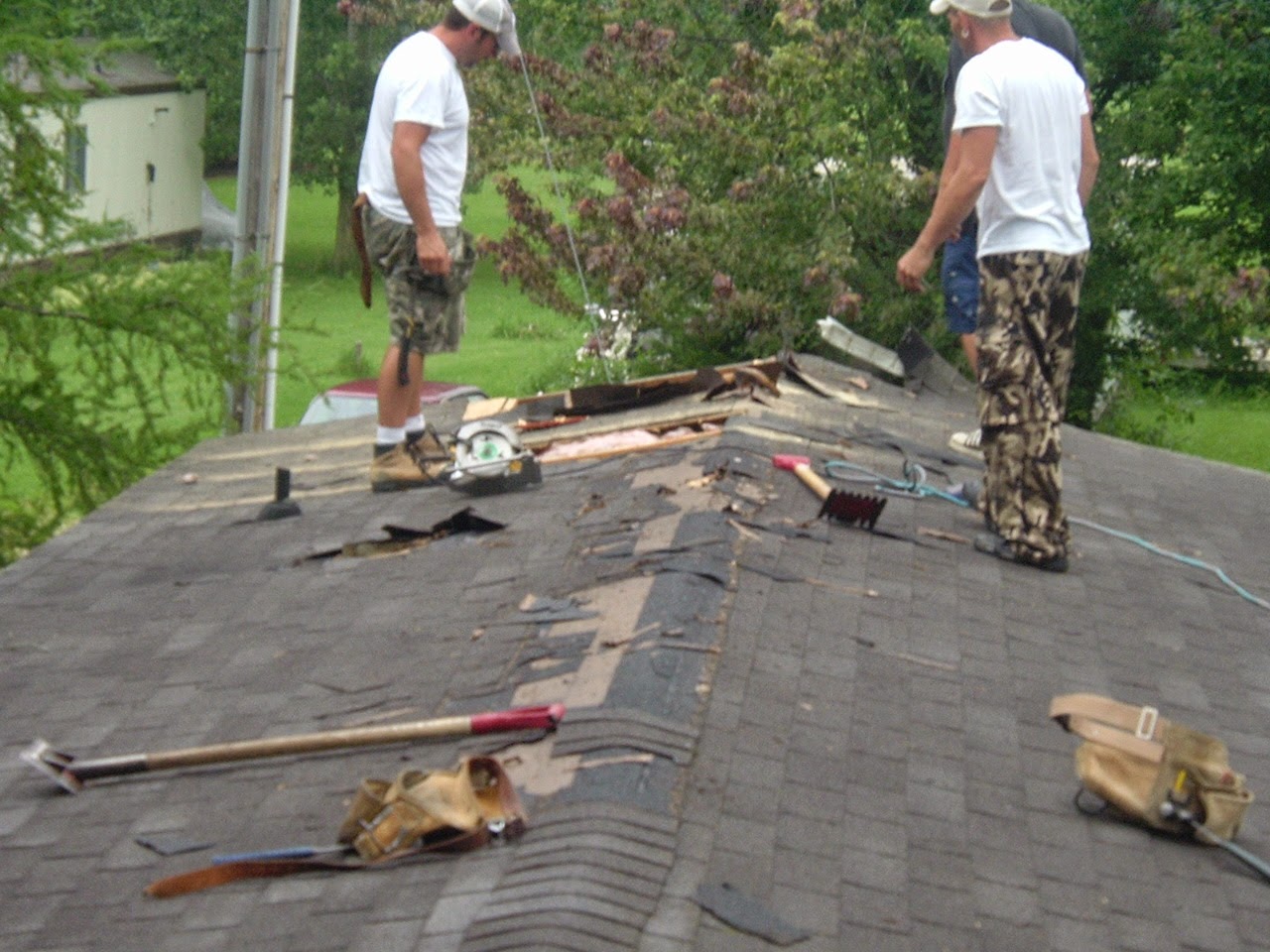 Once the side was stripped back I had them attach a 2 x 4, on edge, to the top of each truss.  This gives me a nice airspace above the insulation and also lets me widen the eaves on the house. 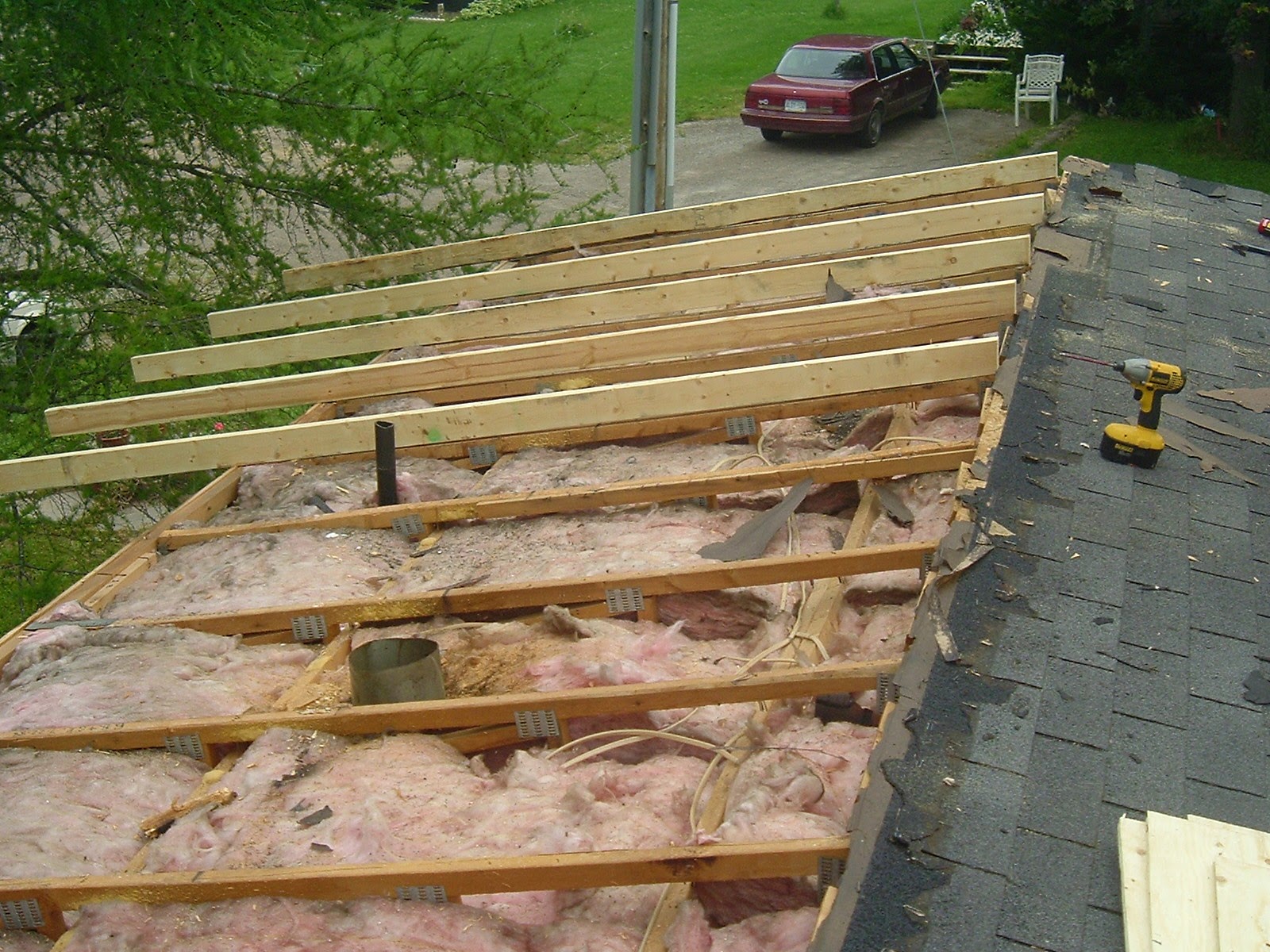 Once that was done it was sheathed with 5/8 T&G plywood. 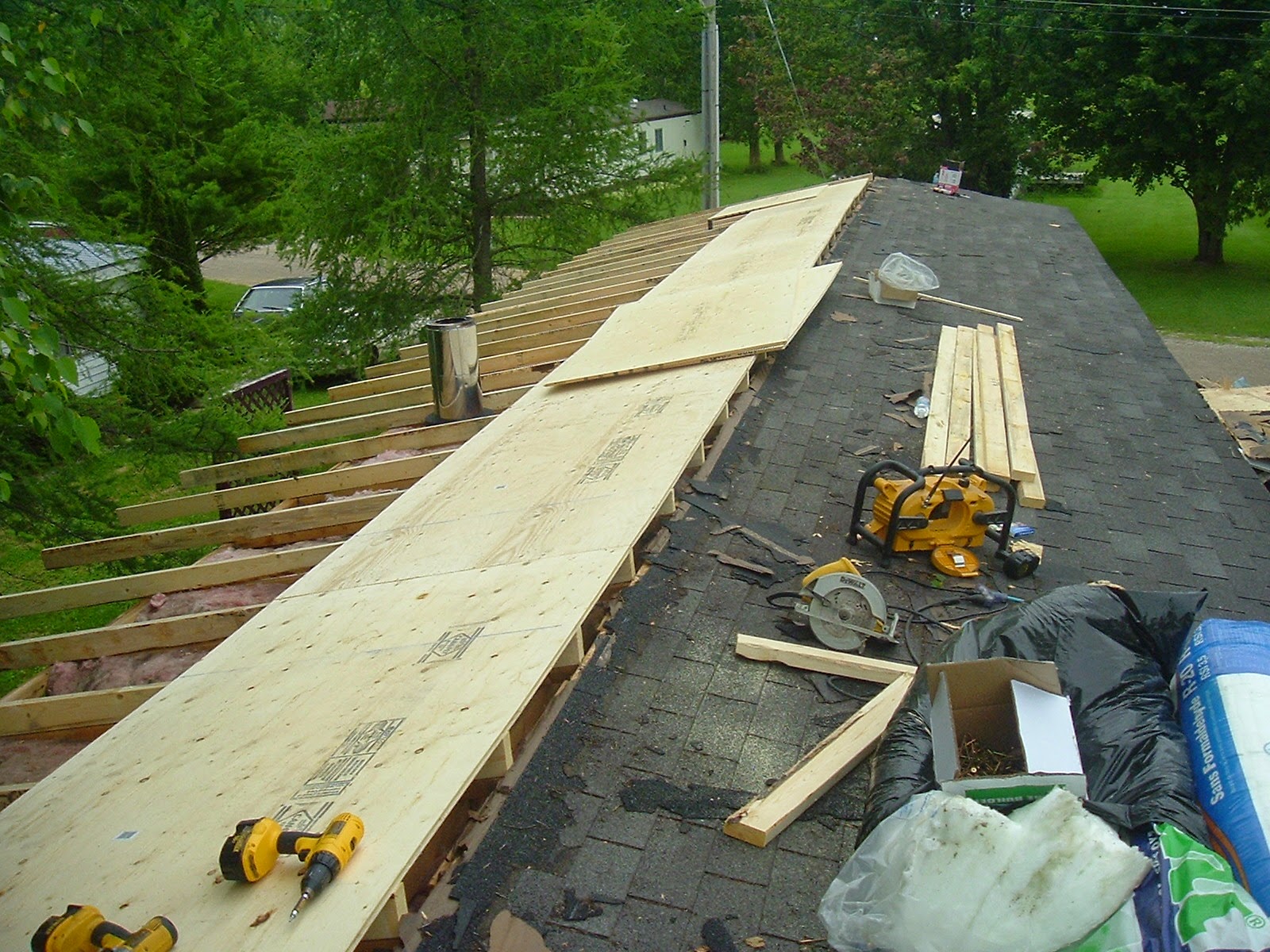 Much stronger and better designed.  After the plywood was down I had them cover it totally with Grace brand ice and water sheild. 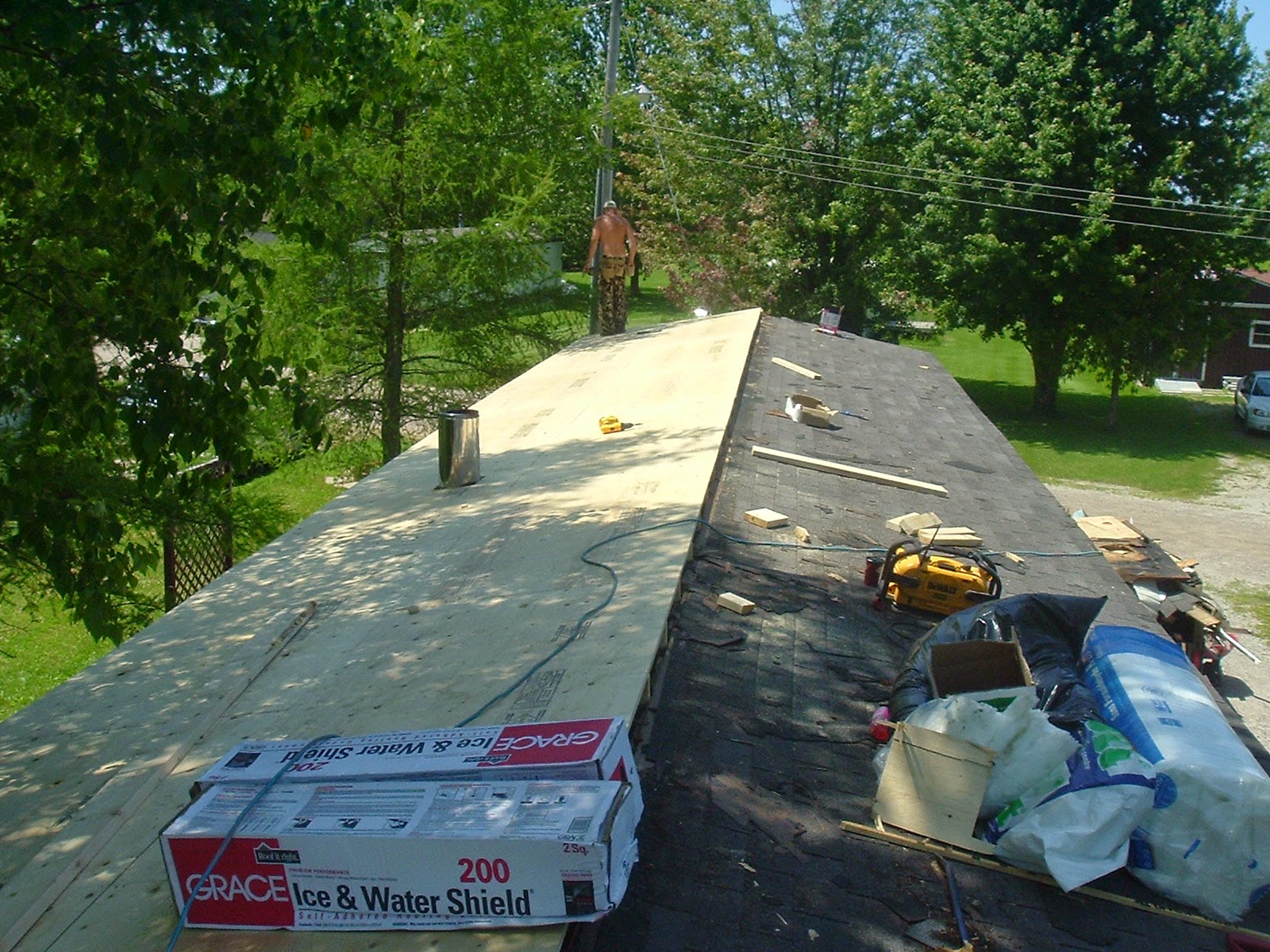 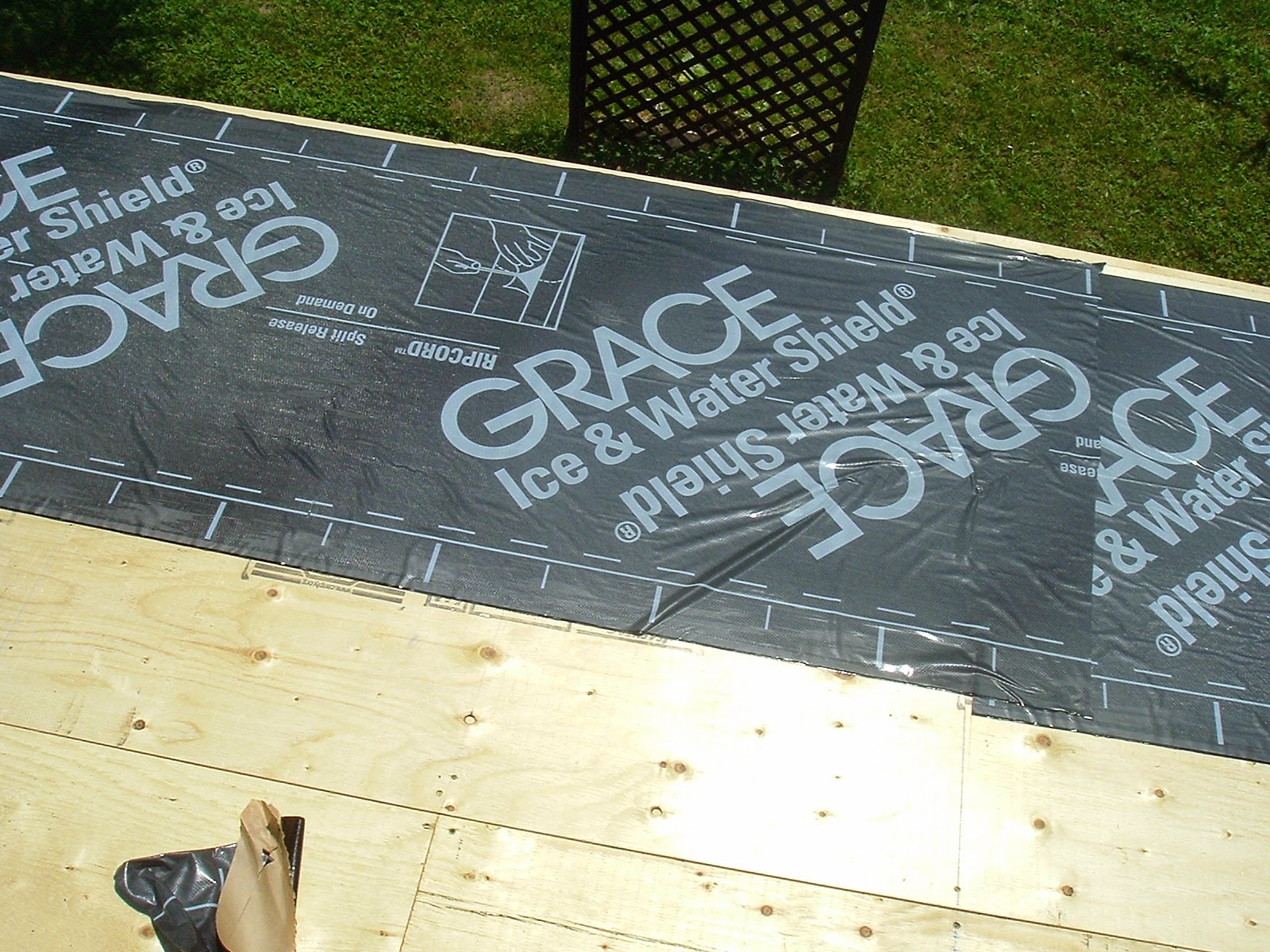 Once both sides were done, it was time for shingles.  Overnight before the 3rd day (shingling day) we had some rain, and apart from a little around the chimney, we had no water get in.  We were waterproof before the shingles.  We selected a green architectural shingle designed to tolerate the low slope of our roof and the lads were soon at it. 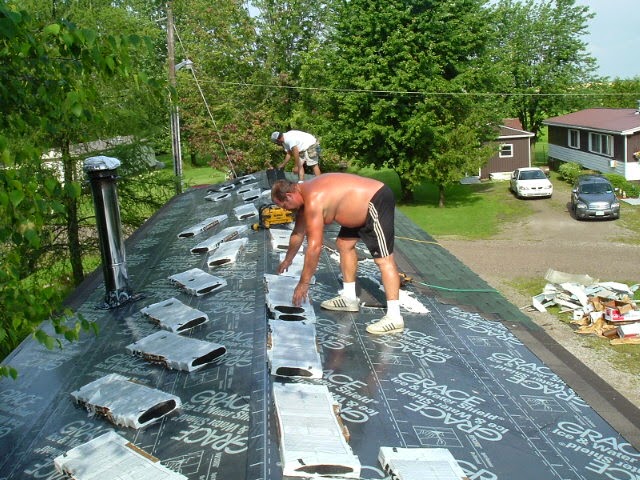 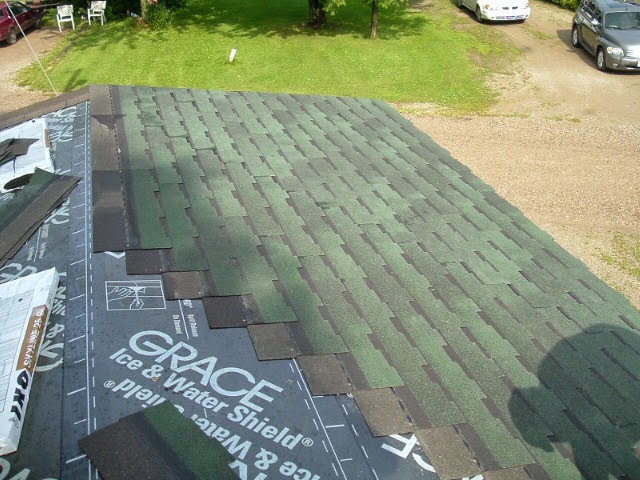 A gap was left at the peak for the ridge vent. 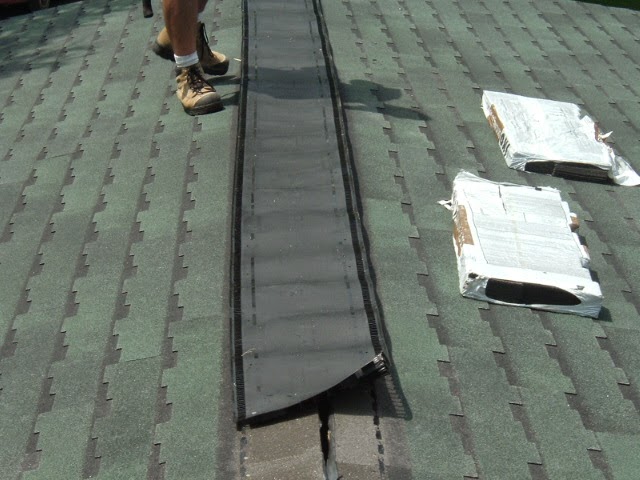 Then capped with consideration for the prevailing wind.  A solid, well designed roof if I do say so myself.  It was 3 hot days these guys put in.  They arrived promptly at 8 in the morning and off to their families at 5 in the evening.  They kept the workplace clean and tidy and did a good job.  Now, I like to think I treated them well with an unlimited supply of ice cold bottled water, or iced tea or soft drinks which were offered, but they stuck to the water.  At noon Sally and I would make up a big tray of buns with cold cuts and sandwich items like tomatoes, cheese, lettuce, etc. and a pitcher of iced tea.  At the end of the day we would treat them to a beer to end the day and have a kind of a wrap up meeting.  Over all we are well pleased with the job.  Aggie seemed OK with it too. 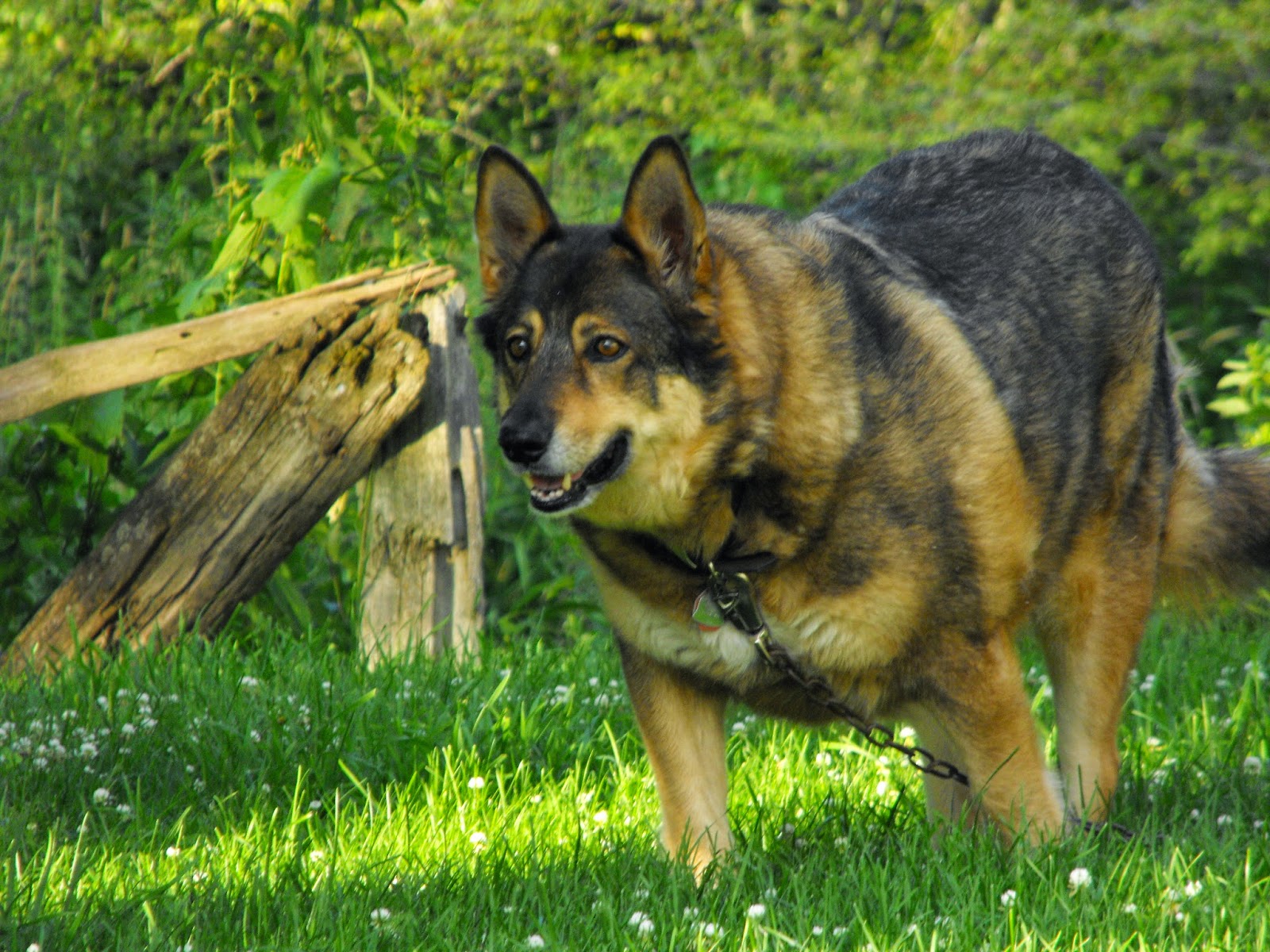 But for the most part, just relaxed under the tree in the shade. 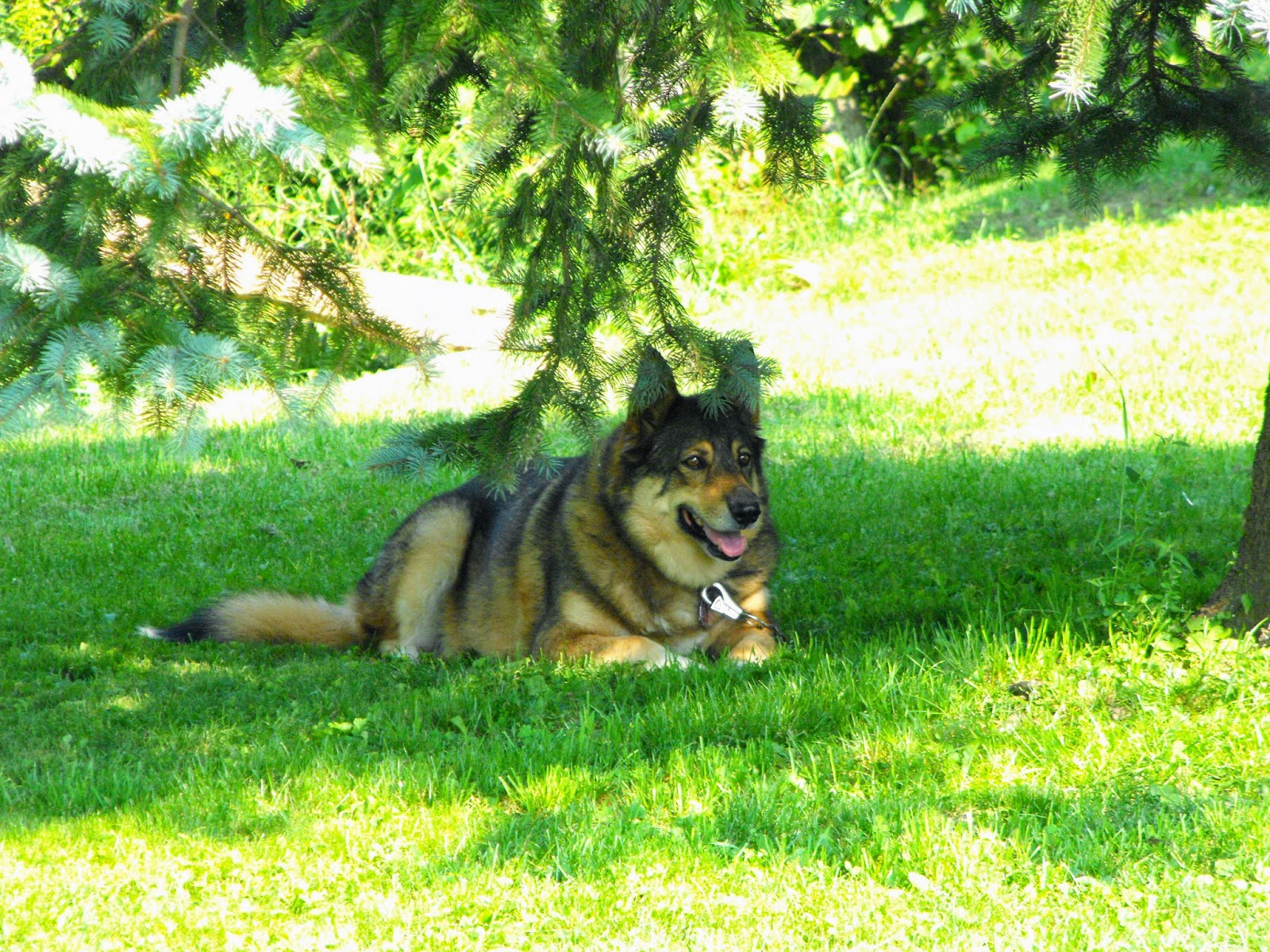 So, that was the house jobs for 2008.  It really wasn't completed until 2014 as the aluminium fascia went on that year.  Up until then the fascia was just painted.   I guess I have to start looking through pictures to see what the next instalment will bring.

Thanks for stopping in!