Welcome back reader!  On the little trip I am taking down memory lane we now come to 2009 and something I have wanted to try for a long time.  Remember the logo?  This is the build of the guitar that spawned the Watertone name and the loon that goes with it (the loon on the logo, not the one writing this story).

The story actually started about 4 years earlier when I cut down an ash tree on our yard and sent the bottom 6 feet to a guy down the road to get milled into 5/4 stock.  After 4 years of drying in several variations of tarp shed it was time to get some use out of it.  I had recently gained possession of a Makita 300 mm thickness planer at no cost (my favourite price).  So that seemed like the place to start.  A bit chilly in April but we got the wood all put through the planer and disposed of the chips with my high tech dust collection system. 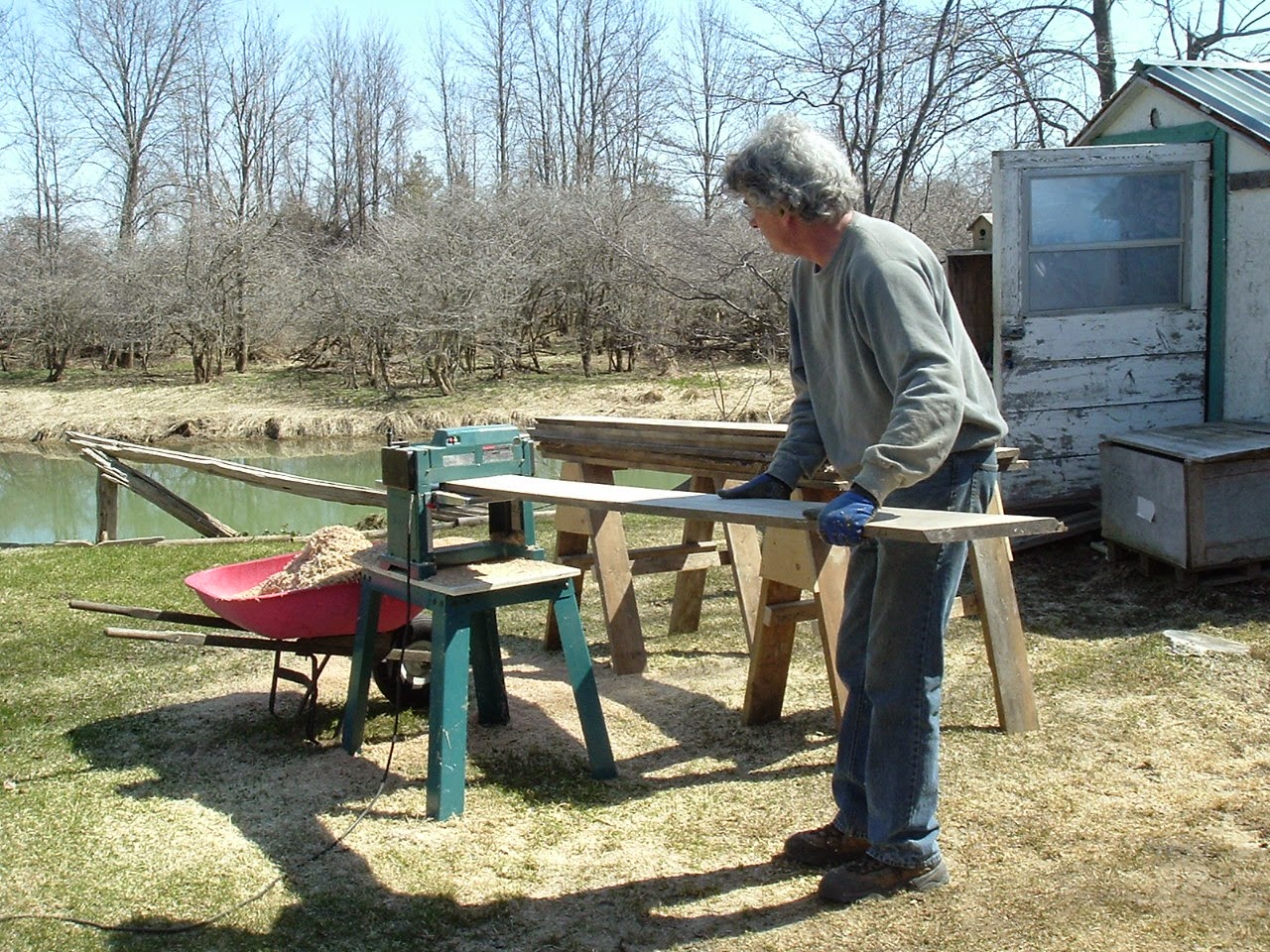 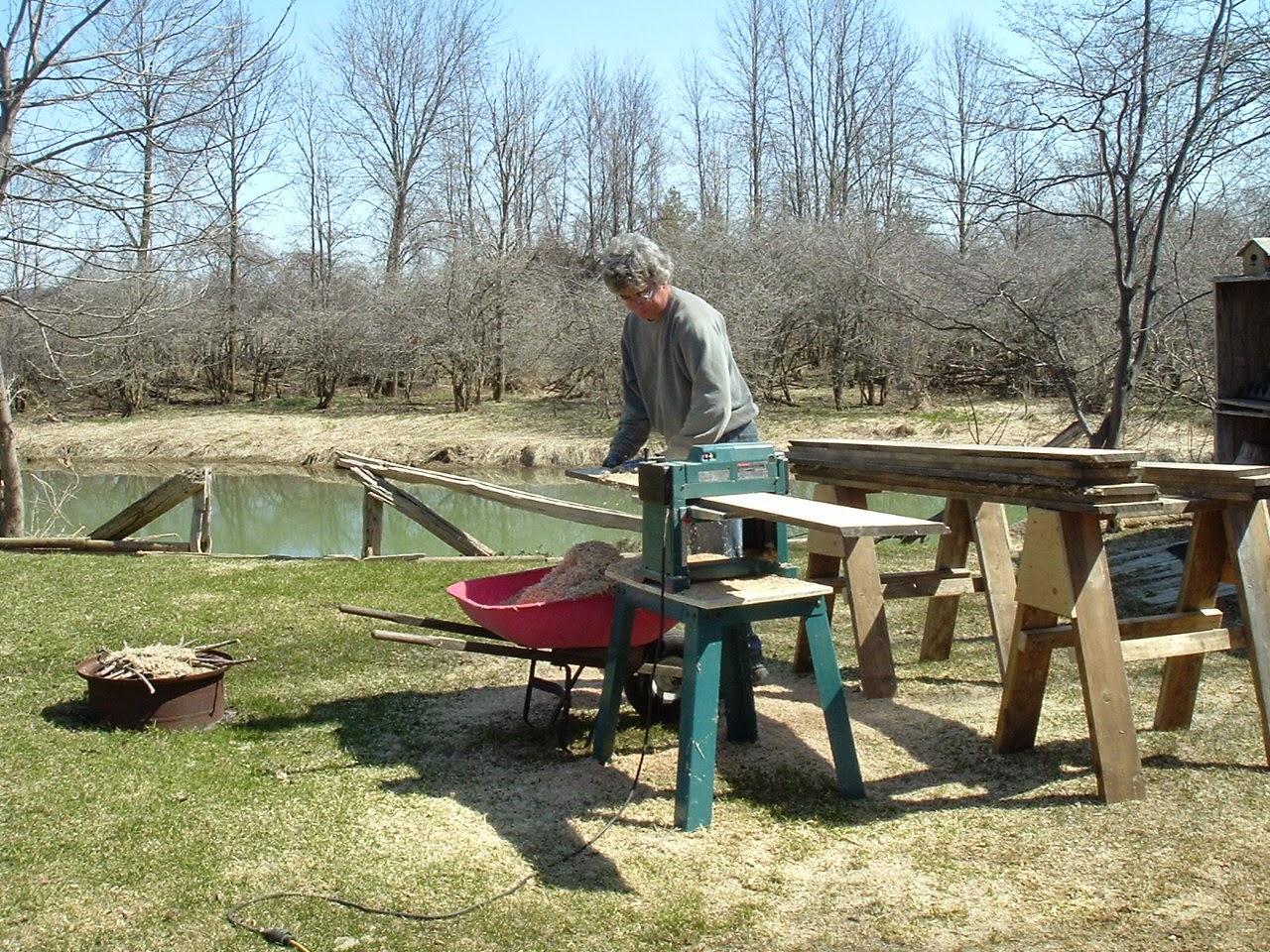 The weird thing about this machine is that the power head is stationary while the table moves up and down.  Not the best thought out system, but like I said, free.
Soon I had a nice little pile of ash boards that I stacked in the front room. 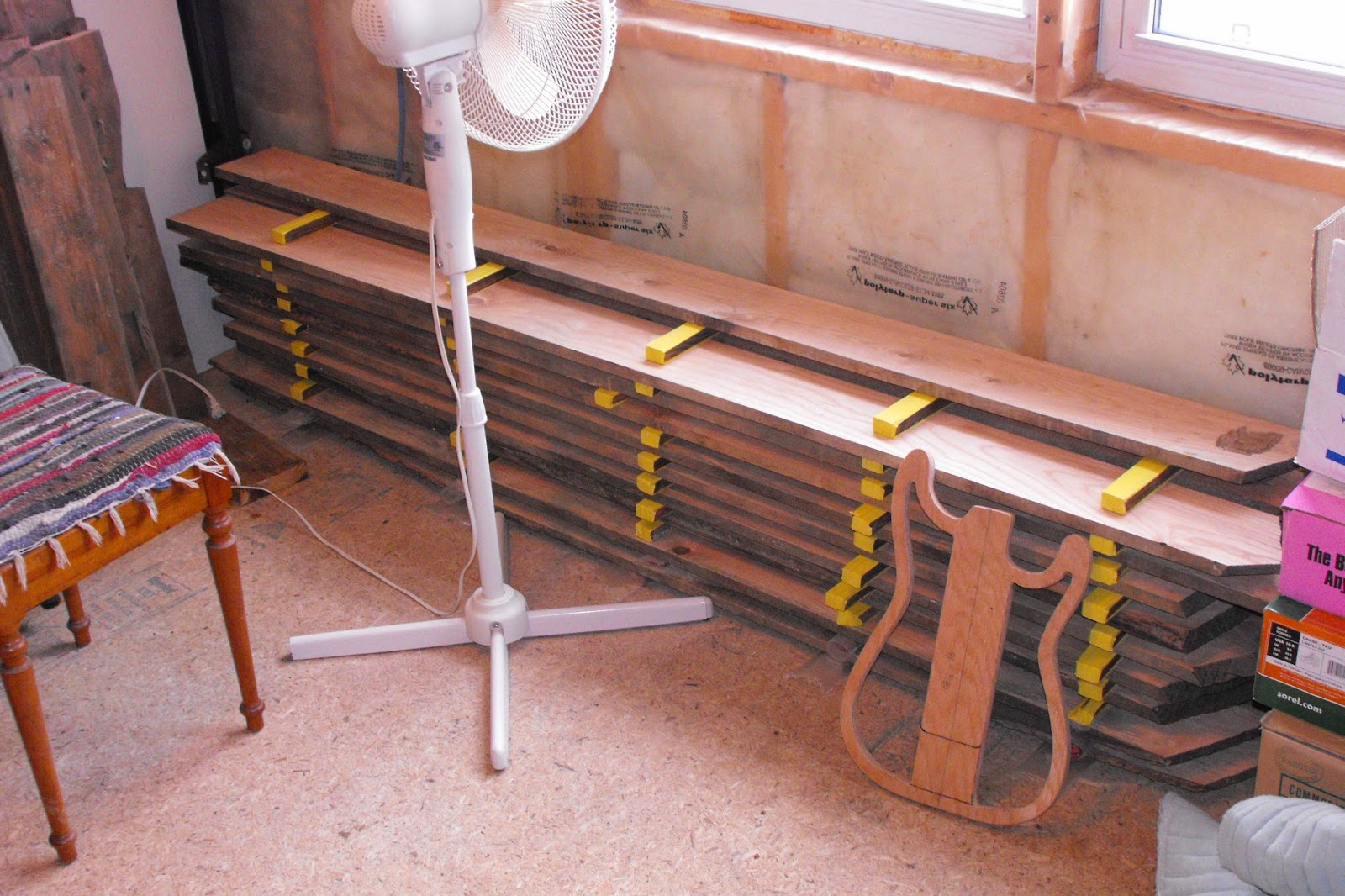 I made myself a router template by tracing around my Squier Strat.  Then I modified it a little to suit my tastes and for my goals for this build.  A hard tail (non-trem) semi hollow strat.  From that stack of boards I found 2 of them that were cut off the log one right after the other so they had a good grain match. 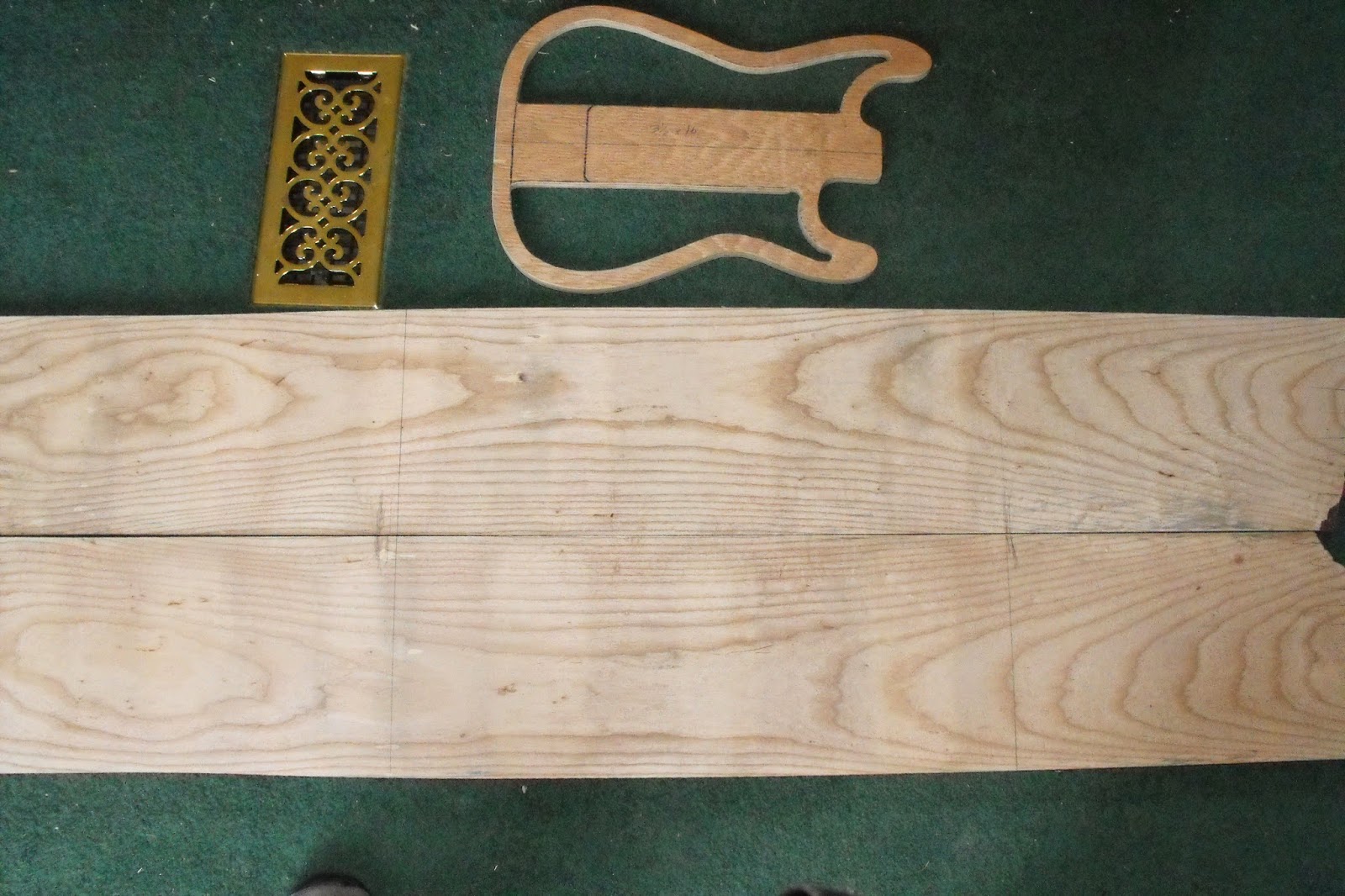 and I cut out the section I liked 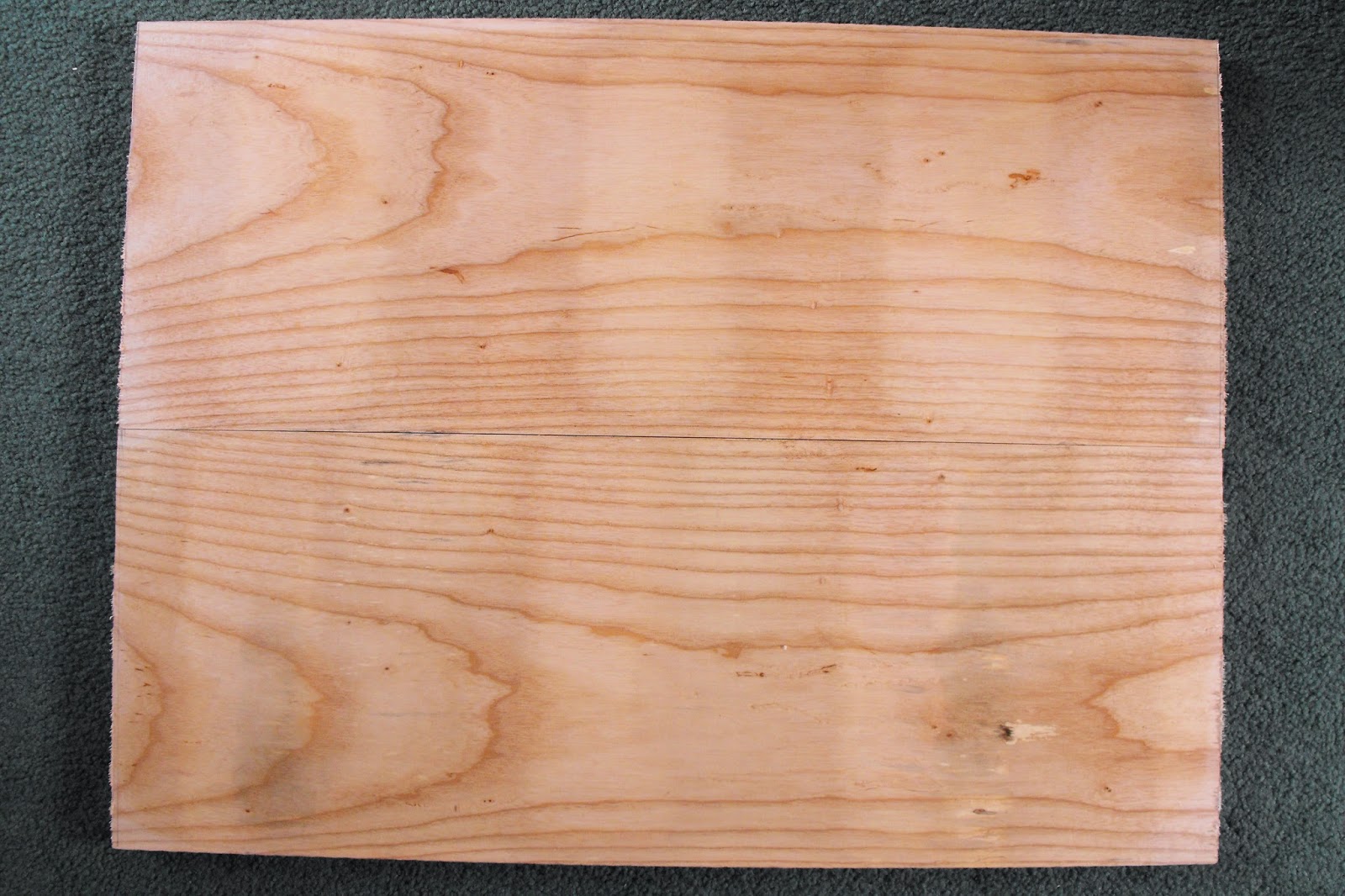 Now these 2 boards are not going together like shown.  They are a book match from being cut from consecutive layers in the tree, but they are much too thick at 3/4".  Instead, each board gets resawn again and book matched, one becoming the top, the other becoming the matching back.  My first go at a book match, so I might as well try to make 2 of them the same.

I then got help resawing, thickness sanding, and getting a maple core for the build.  A big thank you to Mike Newsom who I met through the Canadian Guitar Forum and spent a day with me in his shop getting things done.  Mike is a heck of a nice guy and makes beautiful guitars Newsom guitars .  He also gave me a hand attaching the neck and lots of advice too.  Oh, and a really good spaghetti dinner on top of that.

So, now that I have some thin, book matched panels, I had to edge glue them.  I took a board and pounded some nails into it so that when the panels were pushed flat between the nails it made significant clamping pressure.  Then waxed the centre of the board so my panels would not stick to it.  Glued up the panels and clamped them between the nails. 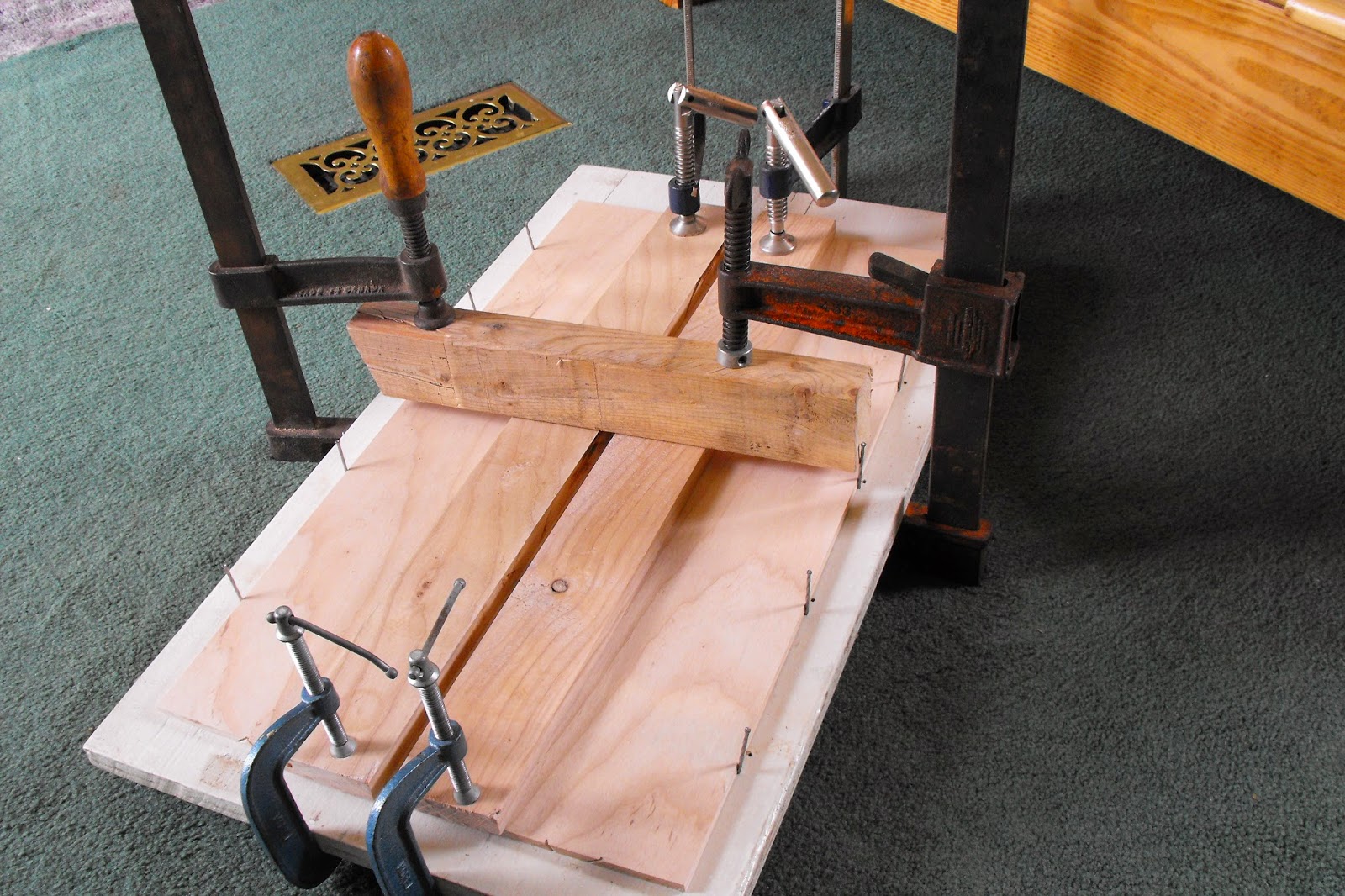 I also rough cut the maple core for the body. 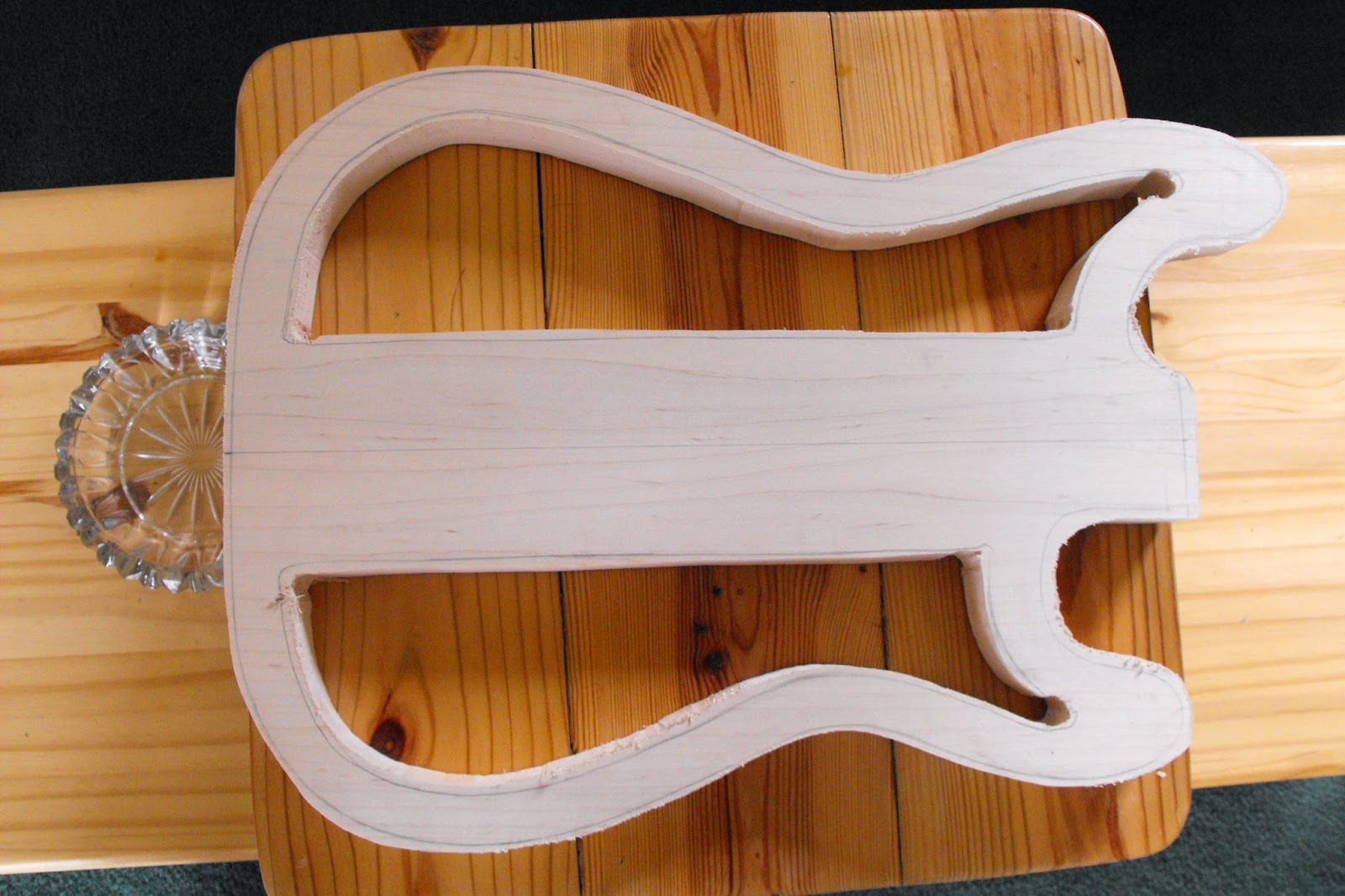 A bit of trimming with the template and the router and I had the core done.  With a back, a front and a core, I could now start to assemble the body.  I first glued the back to the core. 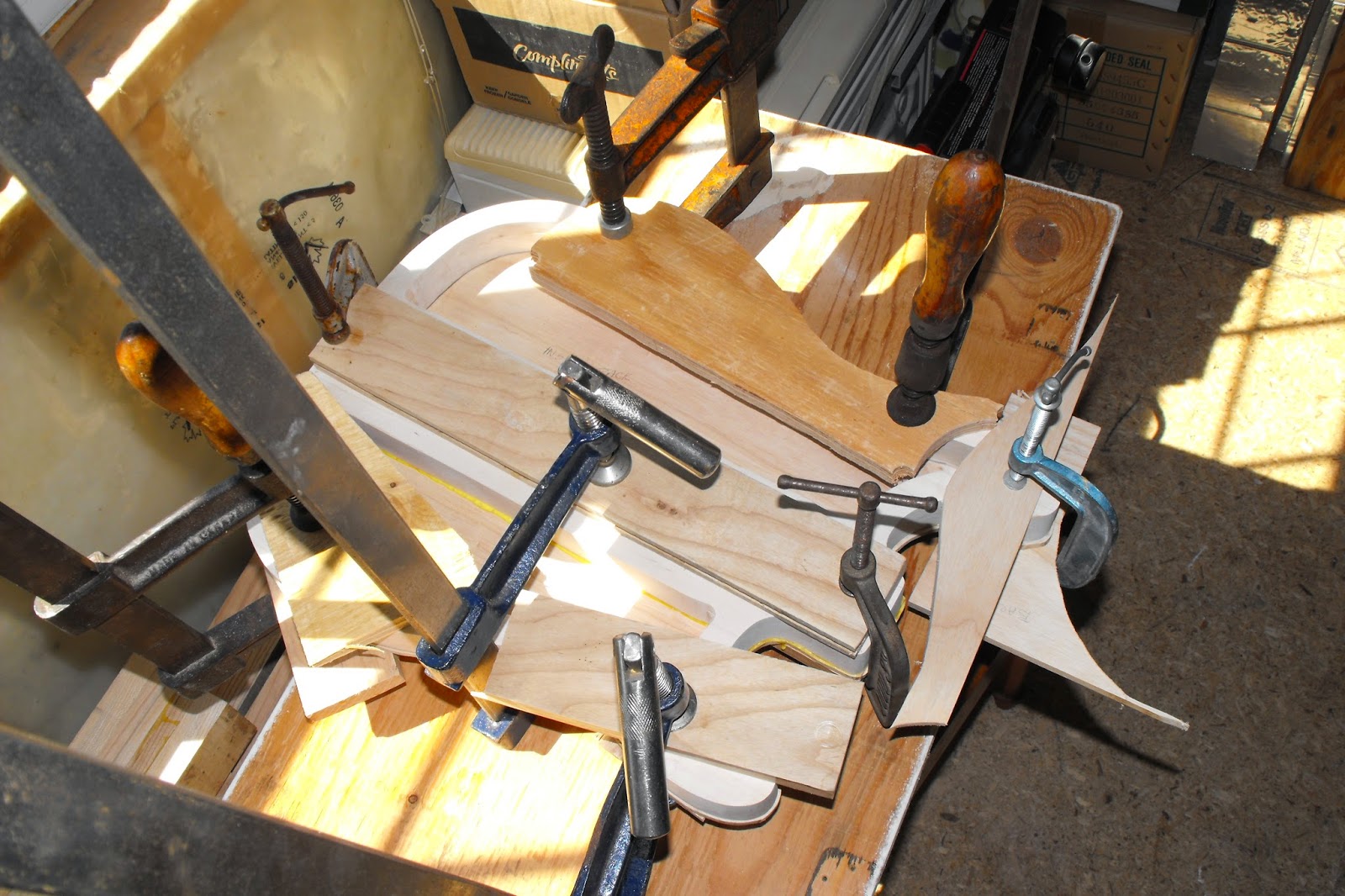 I used plenty of cauls when I glued it up and it came out pretty good. 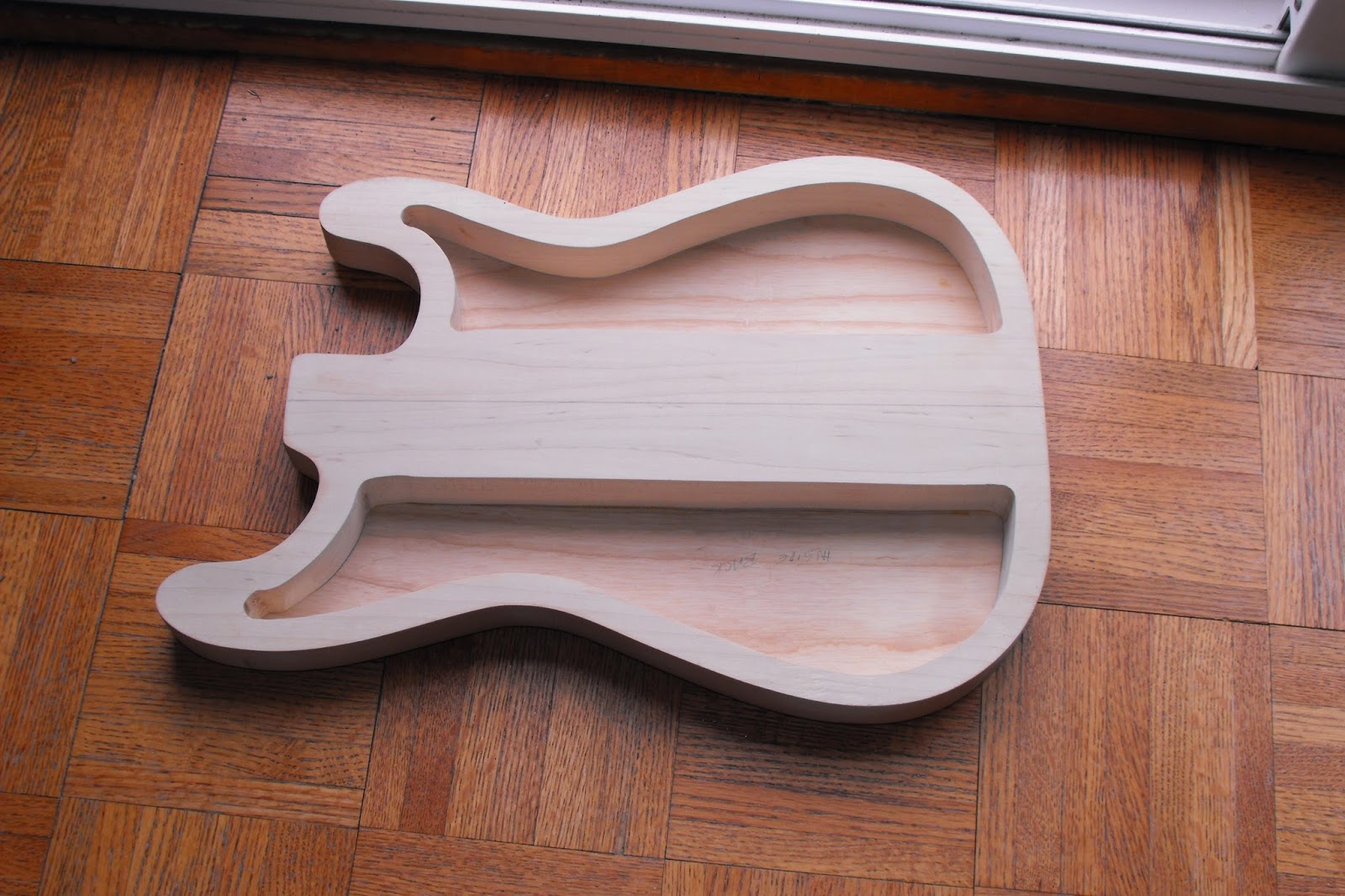 It even kinda looks like a guitar from the back. 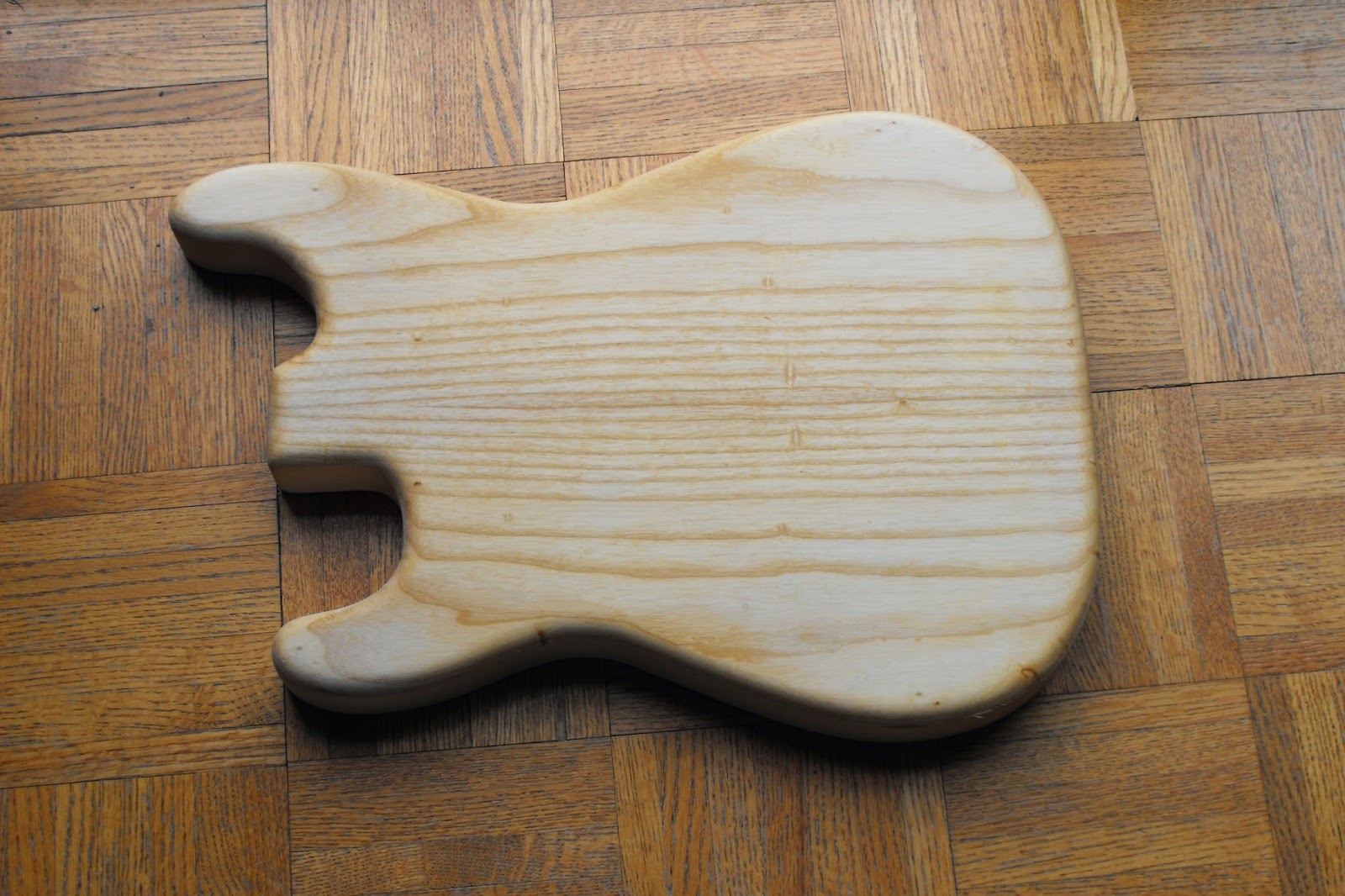 I figured that I would need a way to get the electronics in there, so the next job was to make an access panel.  I cut out what I thought was a good size and shape.  Then I found a cut off that the grain matched fairly well to make the cover. 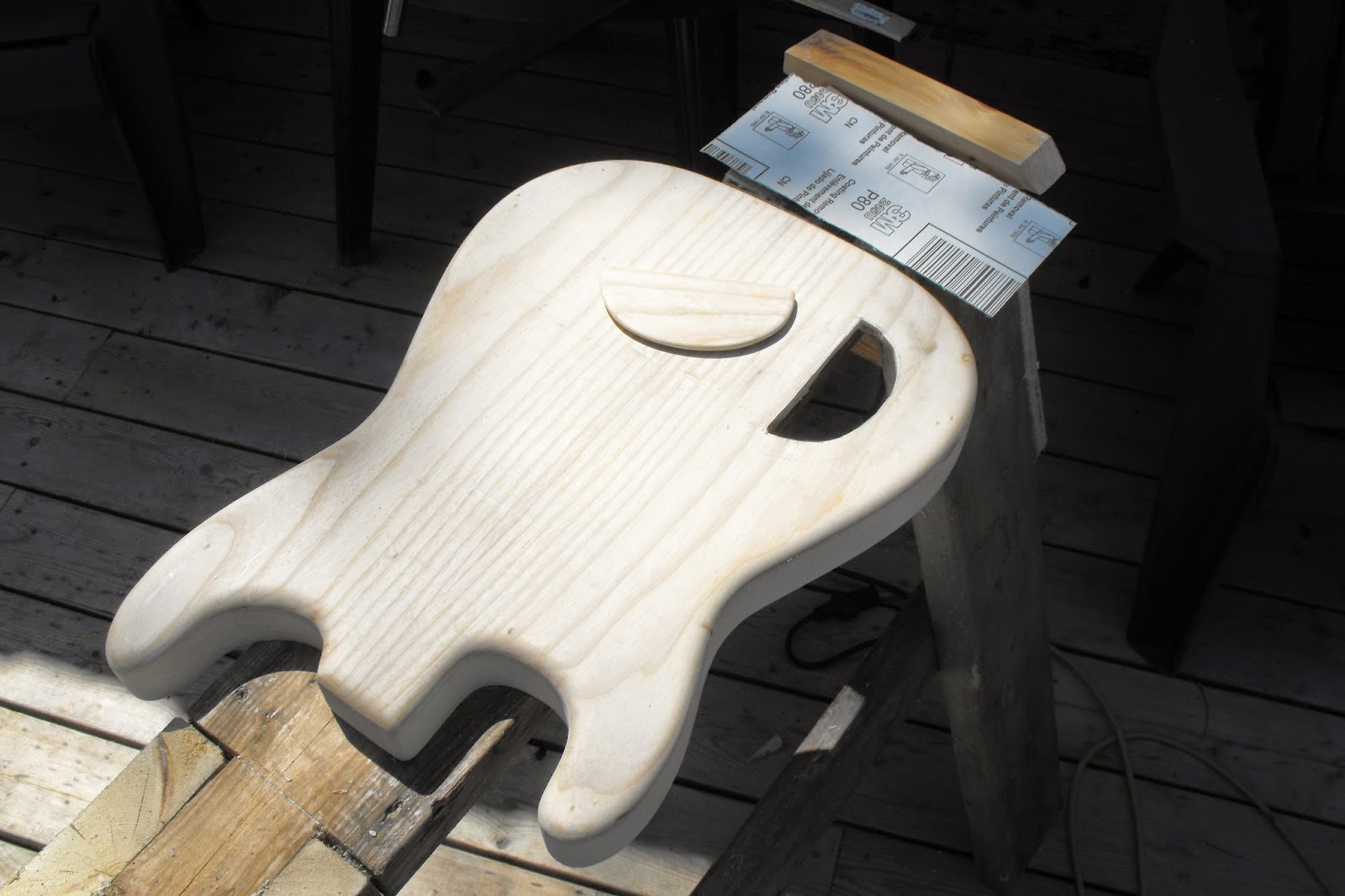 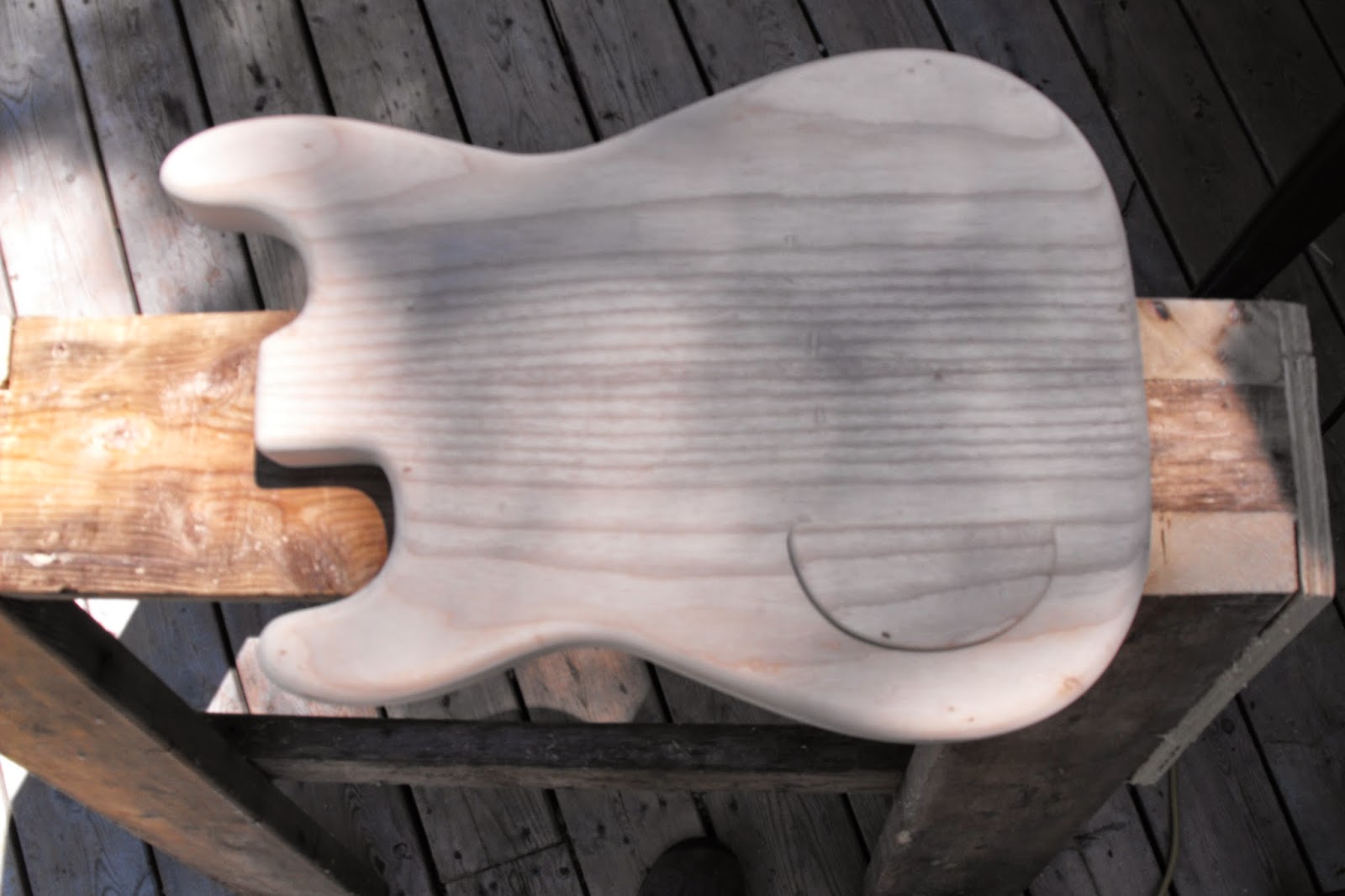 This all took place over 5 weeks or so.  It was not a fast process.  I did the top in much the same way and got it glued on to the core too.  I have to say that I really learned the importance of keeping a centre line.

I was not building a neck for this project.  I thought there were enough challenges for a first guitar build as it was.  There were a lot of firsts in this project.  Popping grain by using ebony aniline dye (water based, from Lee Valley) and then using an antique amber on it to get the colour I wanted.  Then my first effort at French Polishing.  De-waxed shellac is hard to find in these parts.  I ended up ordering from some great folks in Saskatoon Saskatchewan (always seems like cussing when I say that name).  They mailed me some super blonde shellac that came within a couple days of ordering.  Woodessence has a bunch really nice finishing stuff they sell.  I have to give a shout out to a You Tuber who I watched over and over again to get his method of French Polishing. Steve's Guitar Making , his instructions were so helpful in this project!

So, by the middle of July we have made it to this stage 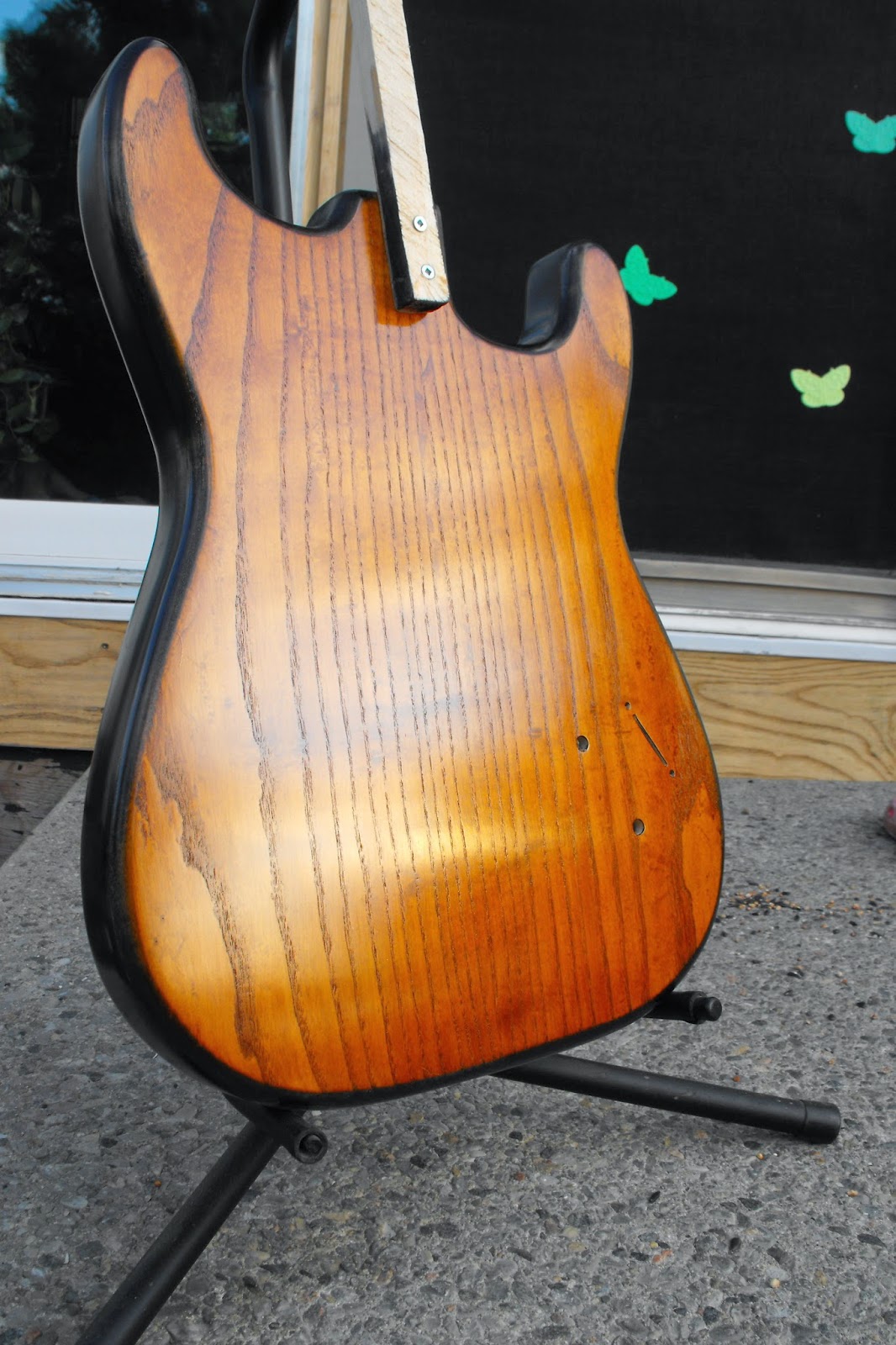 A really good spit coat and the grain filled.  Not finished yet, but some protection on it.  The holes were drilled by making a template from some scrap aluminium I had laying around. 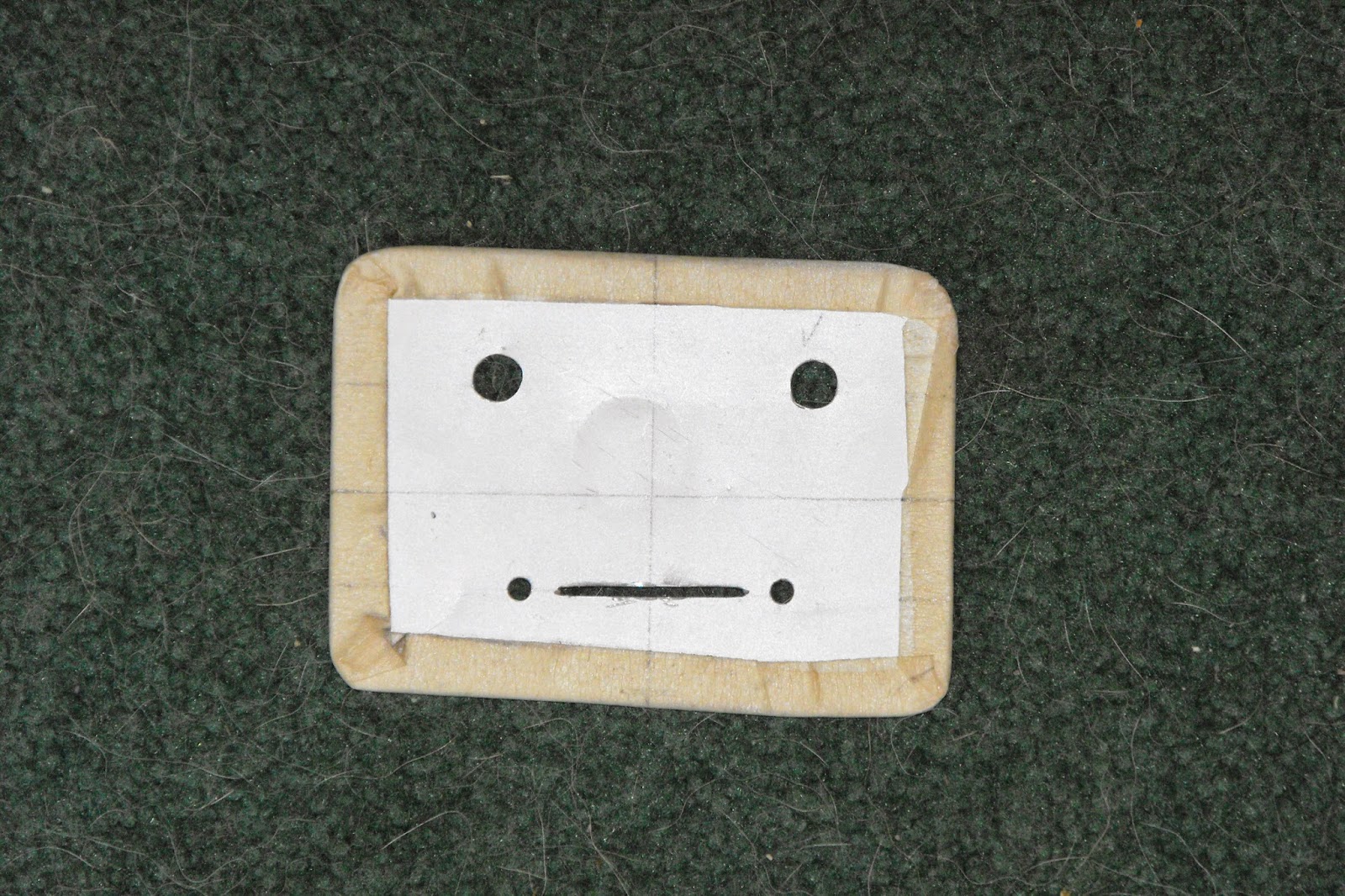 By August I had the neck that I had ordered.  It is an Allparts SMO-FAT, which is about the biggest neck I could find.  I wanted a big profile, a maple fretboard, and the original small fender style headstock.  The headstock got the same french polish as the body.  I made the logo on water transfer stock that can be used in an inkjet printer and buried it between several coats of shellac.  The rest of the neck was finished in Birchwood Casey Tru-Oil, a gunstock finish that is nice to work with and gives a tough finish.  I spent weeks polishing on the guitar, I would sit in front of the TV with the guitar on my lap and apply coat after coat, sanding back to level everything out and using 4F pumice to fill the grain.  Every night I would hang it and let it dry. 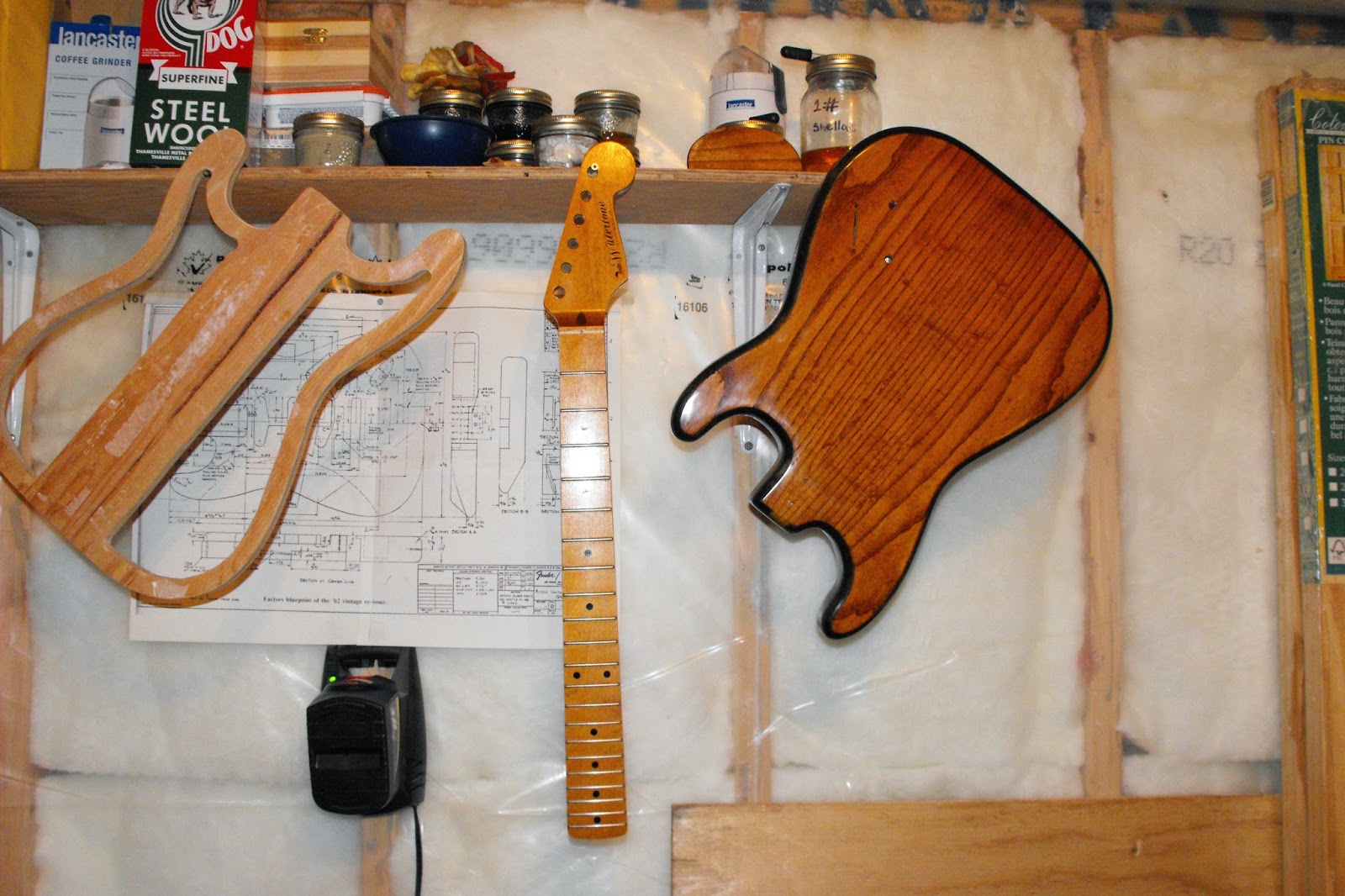 By September the dry wall was put up in that room and I could no longer make a mess in there.  The guitar got treated pretty well though. 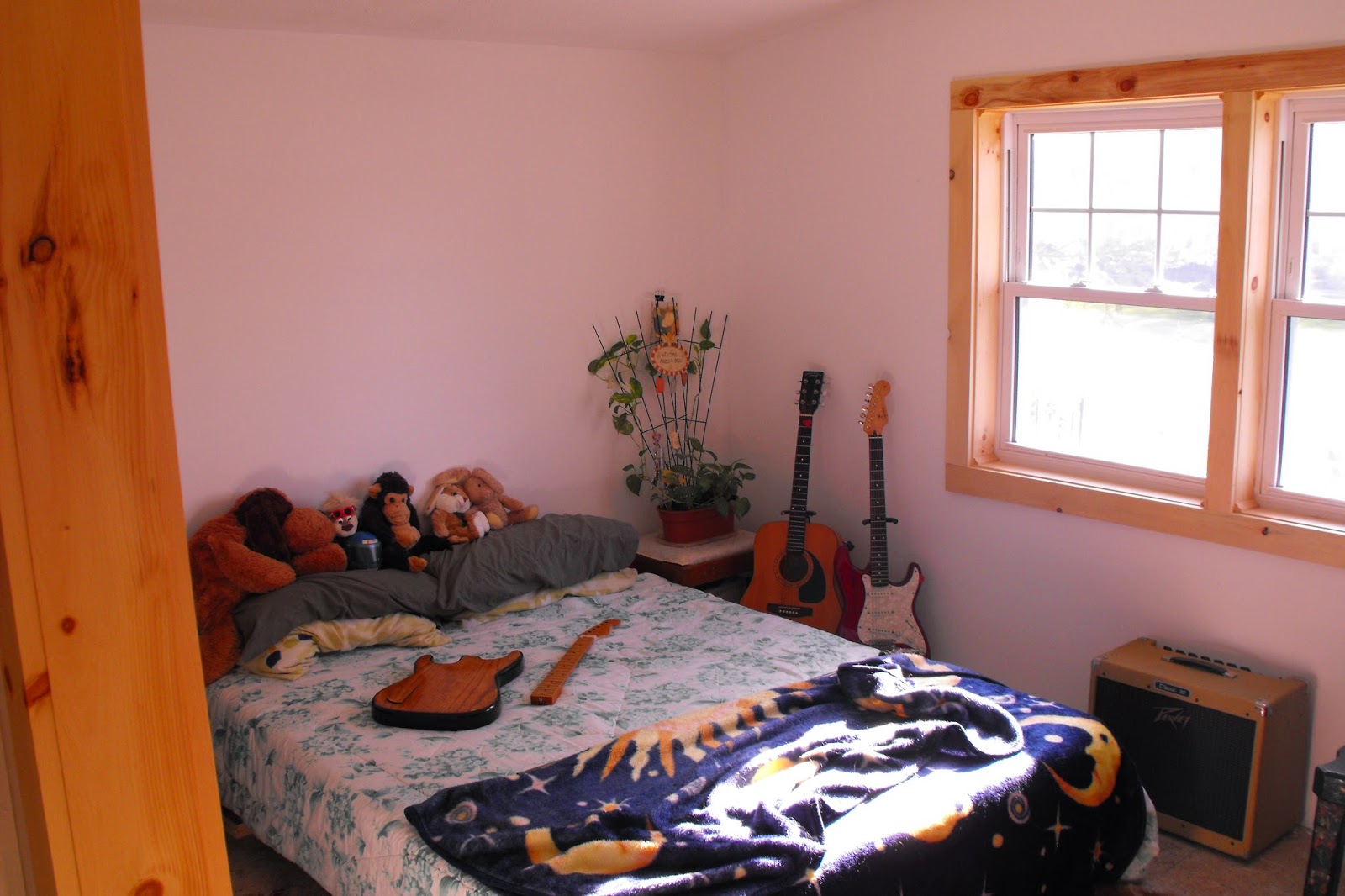 That is the Squier in the photo that I made the template from.  It is a Korean made unit from the Cort factory.  It is a Pro Tone model, which are well made and sought after.  It is no longer mine though, I did sell it, also the Peavey Classic 30 is gone now.  30 watts of tube power is way too loud for most rooms.

By October I had the neck routed with a jig I made directly from the neck itself.  It worked out very well, holding together by friction alone when I was done. 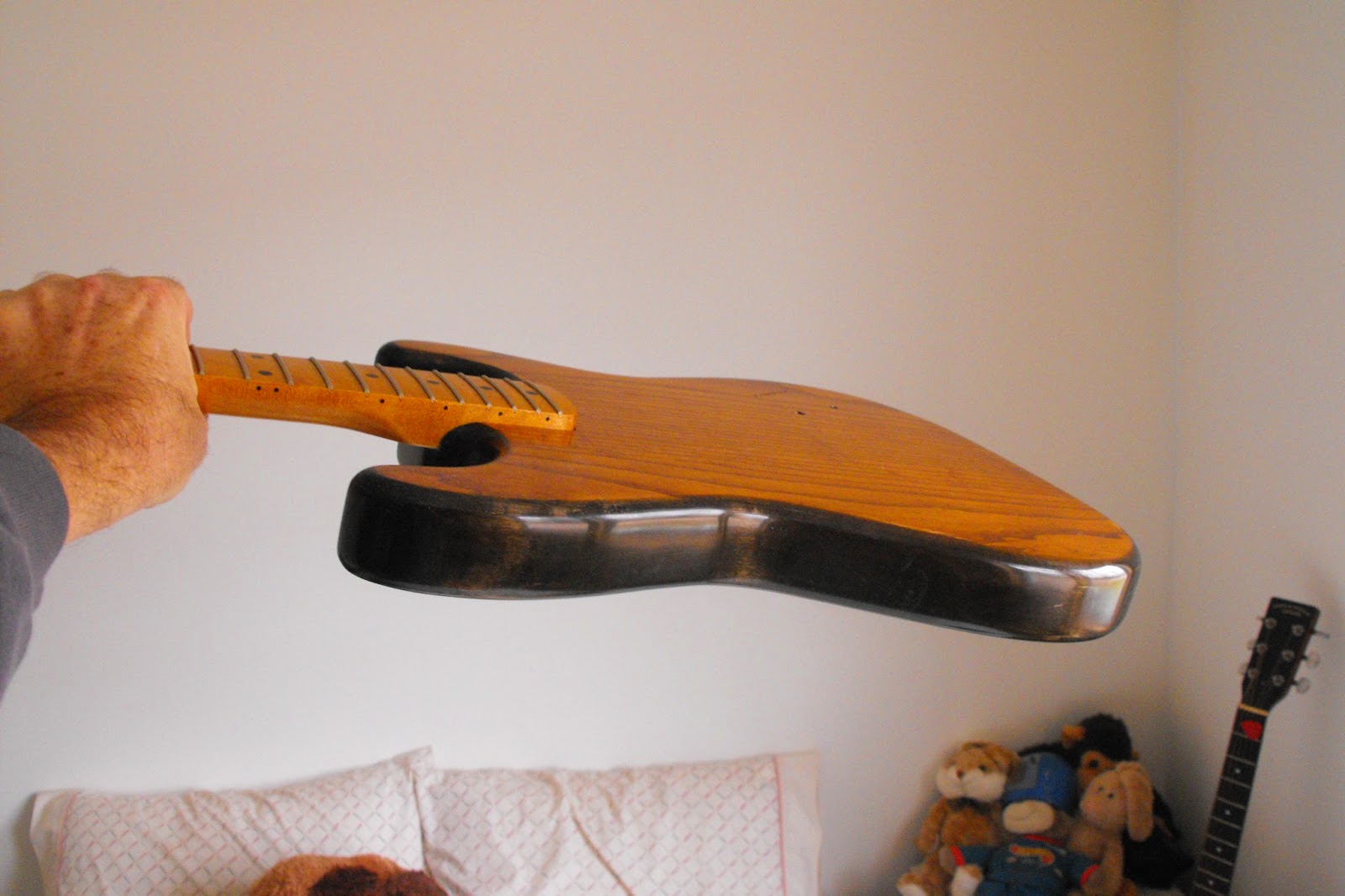 The jig was made by taking a section out of a piece of plywood, putting the neck in the space, then butting lexan right up to the neck in order to make another template for the router. 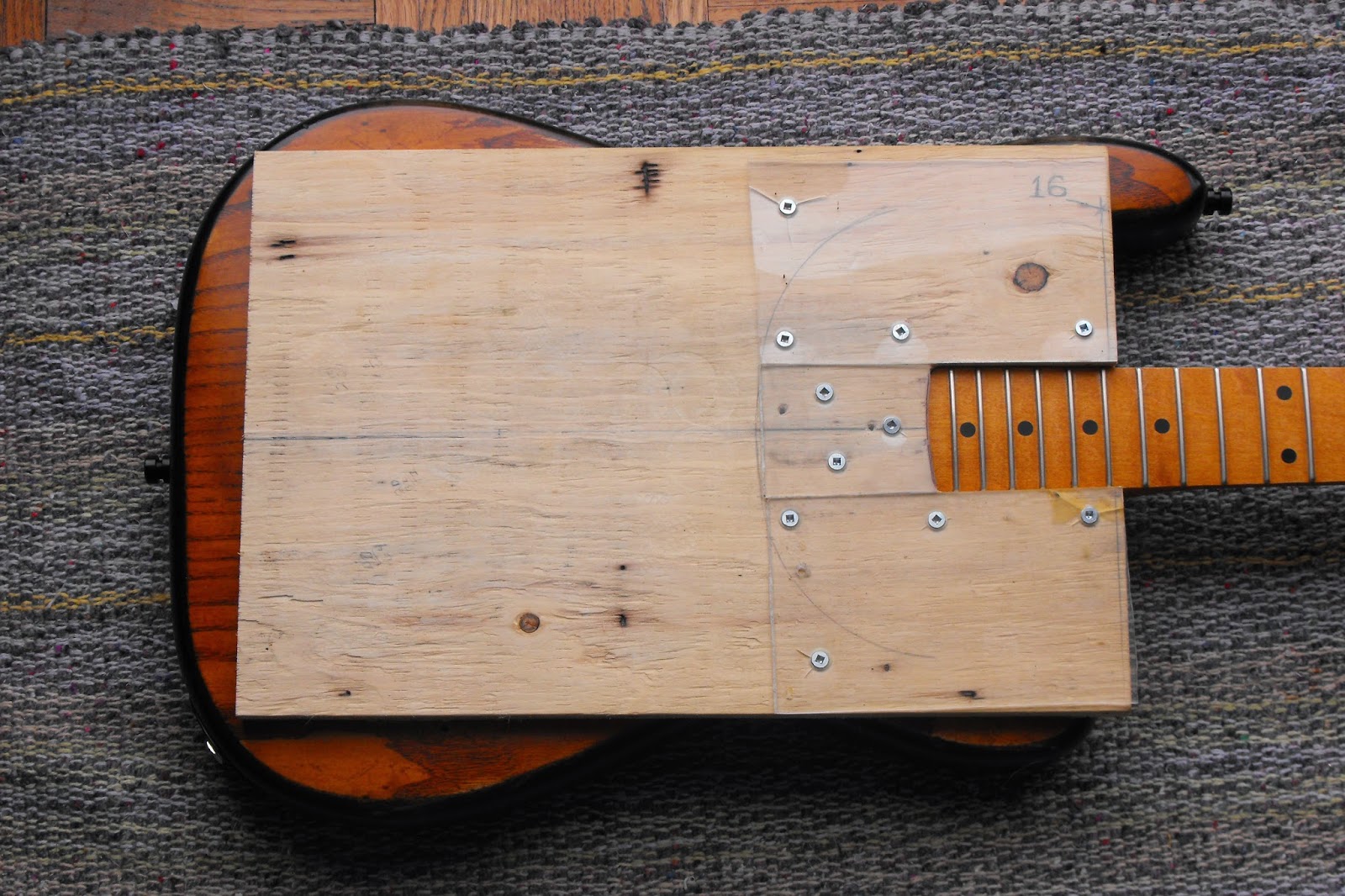 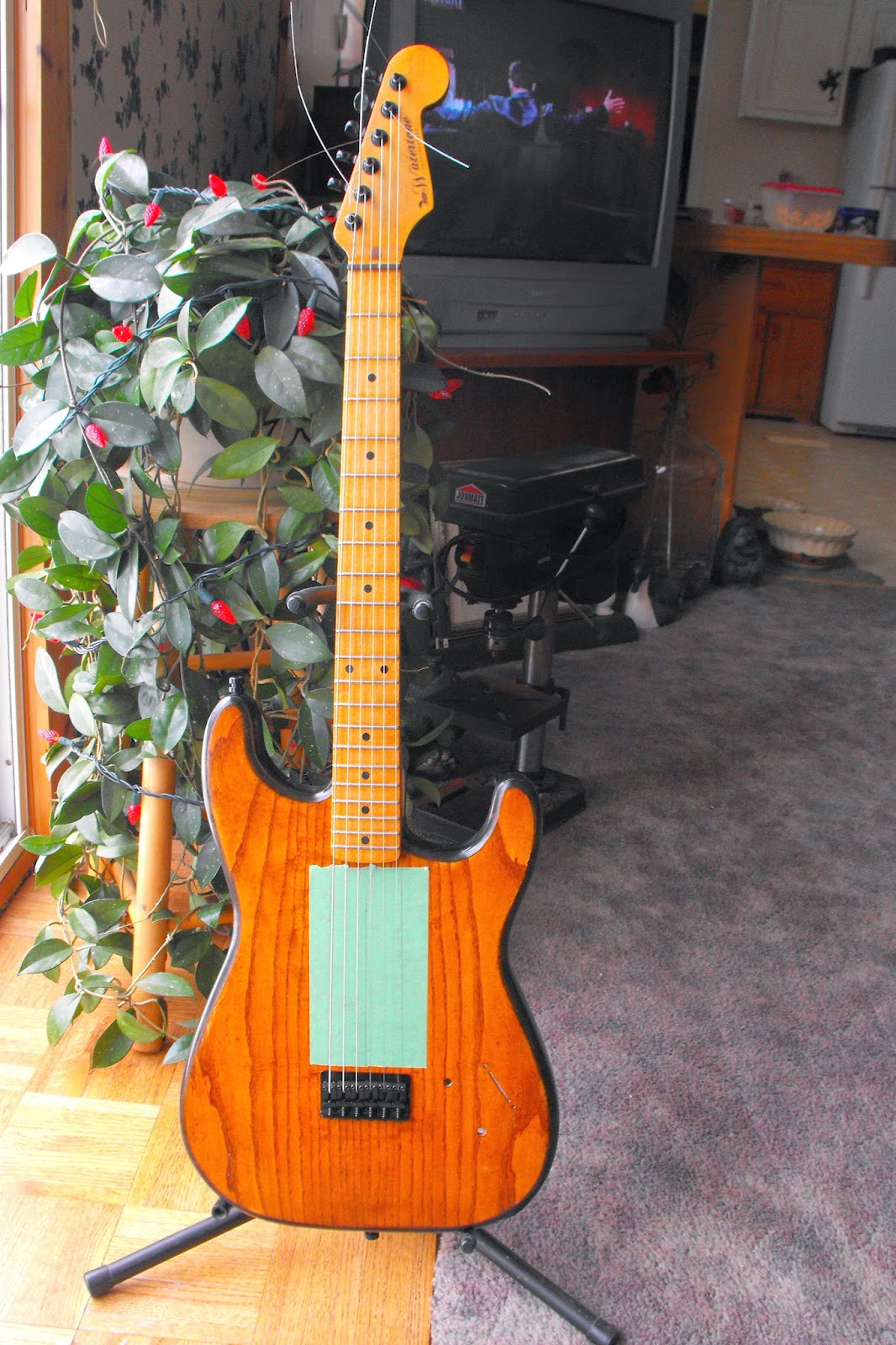 I decided to go the string through body route so I drilled the holes through the body (taking power tools to something with finish on it is nerve racking) by chucking the bit in a Dremel and using a plunge router base for it to make the holes go in straight.  They lined up pretty good.  Note the metallic shielding tape inside the control cavity. 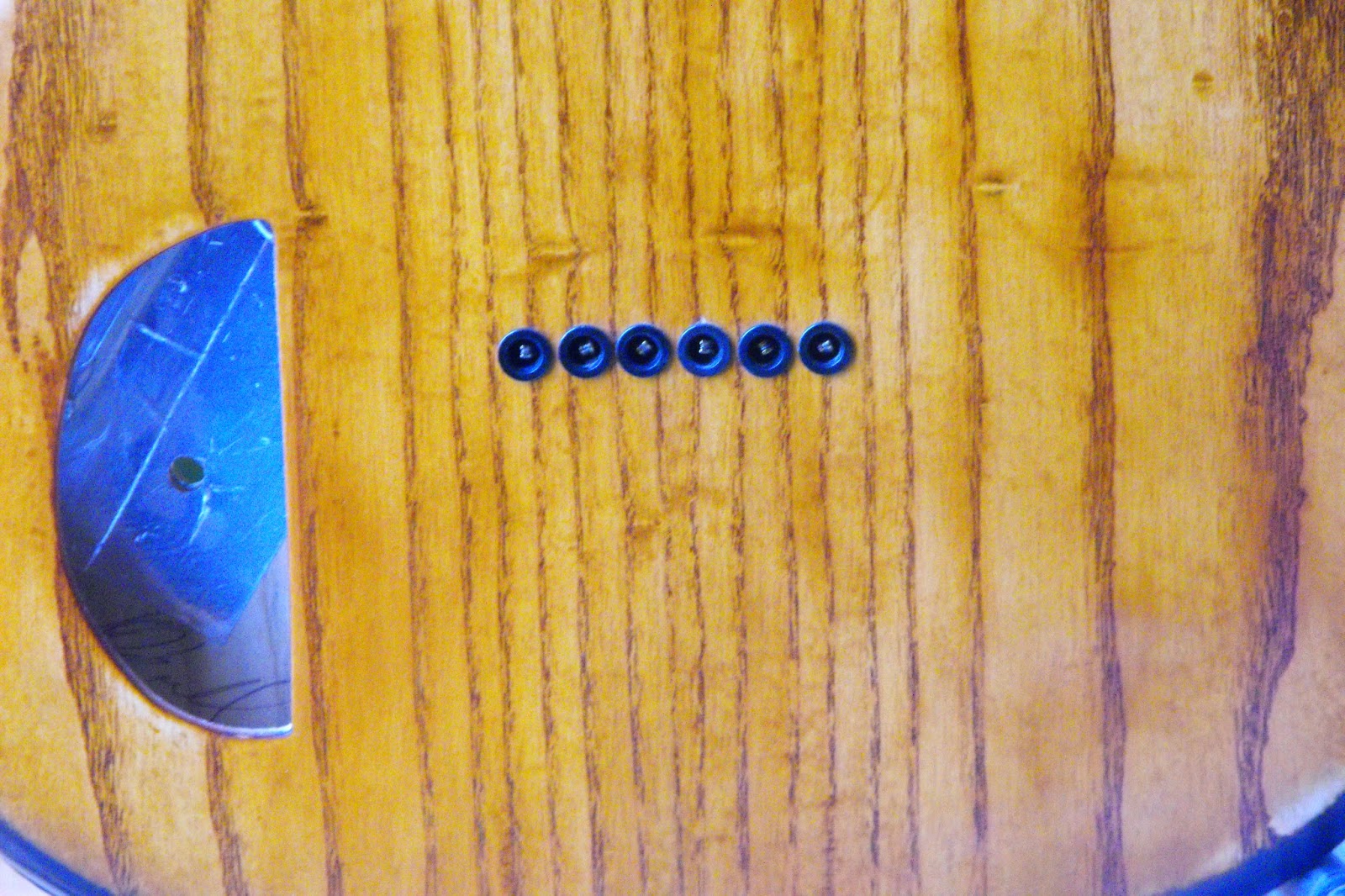 That was pretty much it for 2009.  Work on the guitar stopped for the winter.  Not to be on the go again until the next summer.  I needed to wait for the budget to recover to get some parts, so the project went into limbo for a bit.  The other thing I started to do was to start tearing apart my table saw.  I got it from my dad that summer (my favourite price again) but it needed some TLC.  It is a 1972 Craftsman direct drive. 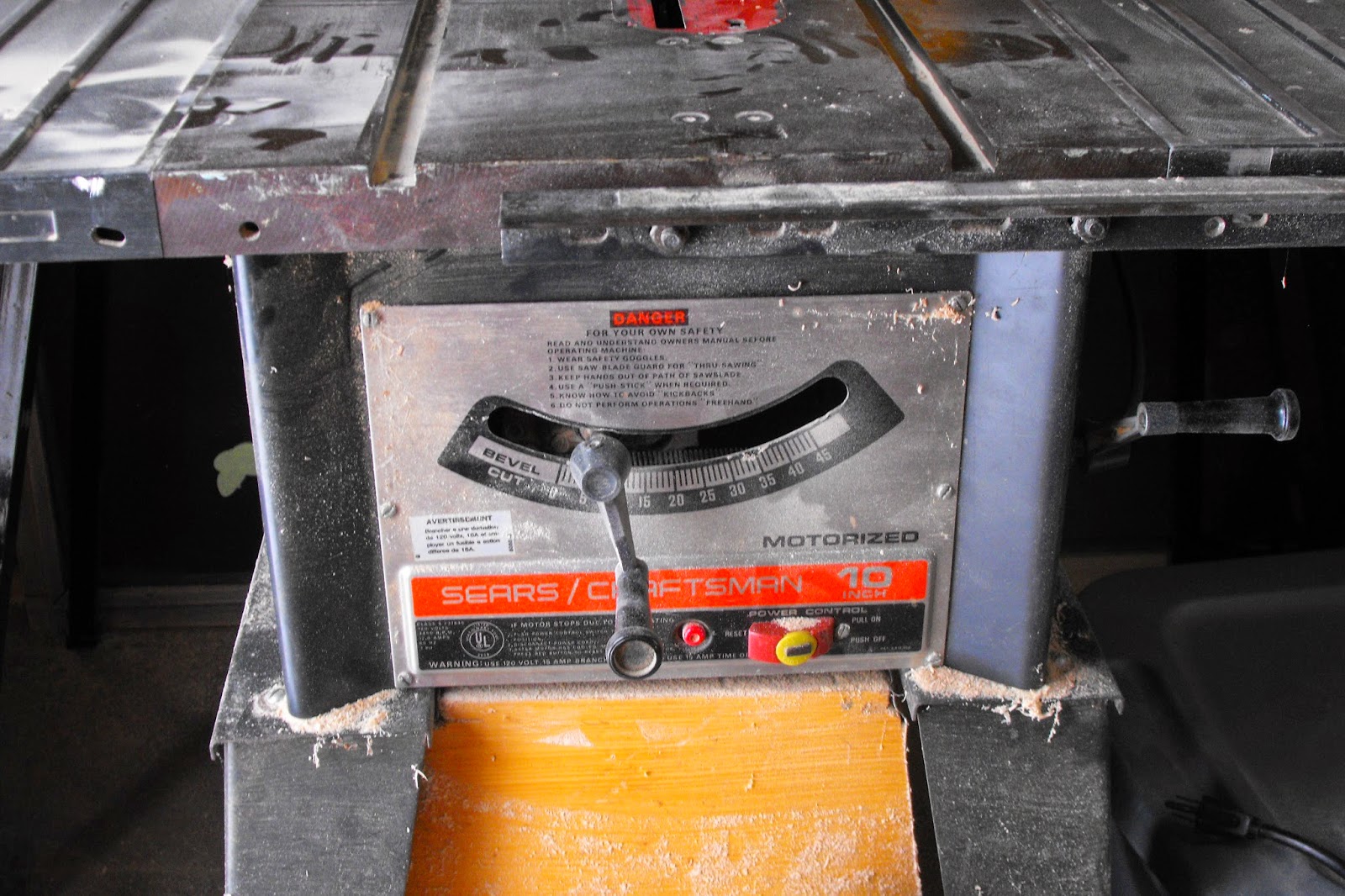 The top had sagged a bit over the years  (We all start to sag a bit when we are getting close to 40 years old). We will see how that gets fixed next time when we get to 2010.  Along with more tools and more guitar building.

Thanks for stopping by!