Home, it really is where the heart is.

As I said last time, we really love our home.  Like they say "It ain't much, but it is all ours".  I don't really know who "They" are, but there are a lot of good sayings that come out of that group.

2005 brought some big changes in our lives.  Some were bitter, but we carry on.  It was time for another fix for the house.  This time a set of sliding patio doors.  6' wide.  Of course, where we (and by we I mean, that is where my wife wanted it) wanted it was 1/2 way into the old door, and the other end was 1/2 way into an existing window.  So to put in a 6' door, out comes about 12' of wall. 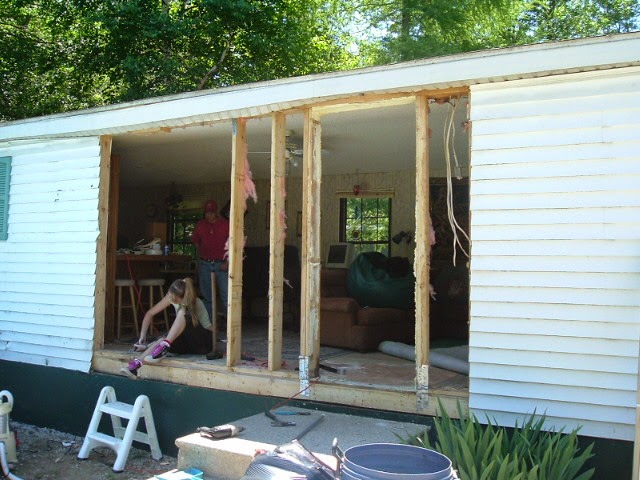 Well, I didn't take it all out at once.  I had some help from my daughter and my buddy Dan.  Of course Sally (my wife) is always helping, no matter what is going on.  I built up a lintel by laminating plywood together as it also had to function as the top plate.  One thing about this place is that the walls inside are only 7' tall.  There are cathedral ceilings through out. 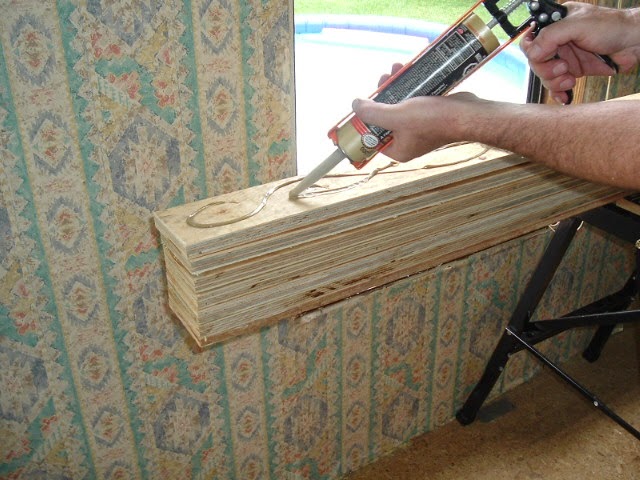 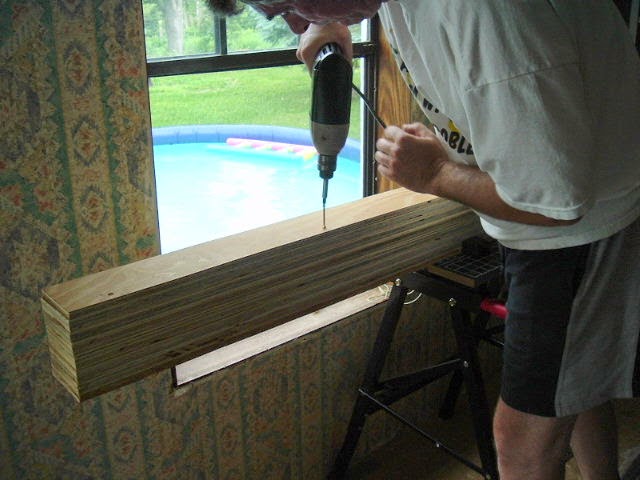 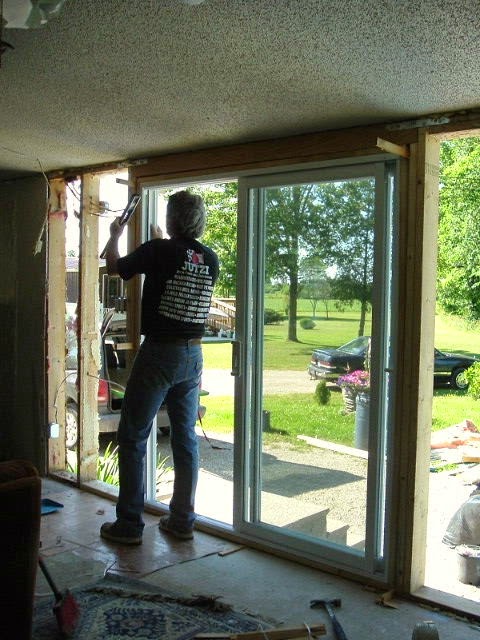 A bit of new framing and in it went.  Then it was just a matter of closing it in again. 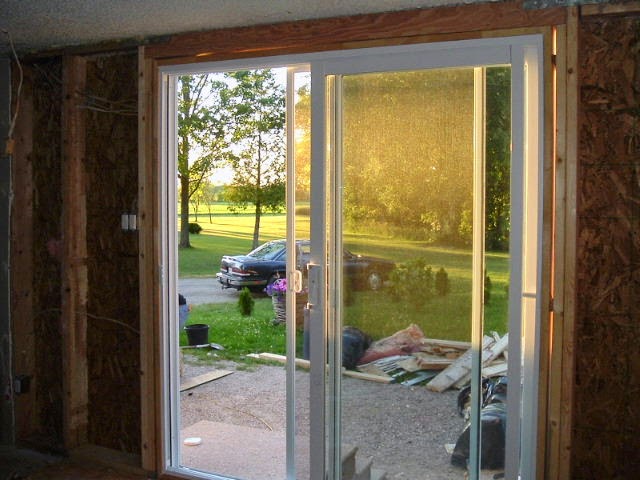 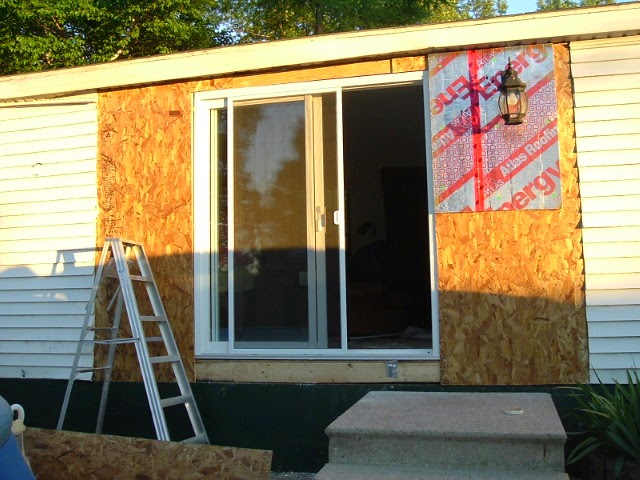 The front door that came out was one that I had installed myself and when I took it out I was careful and used it to replace the leaky back door.  Which brought us to this 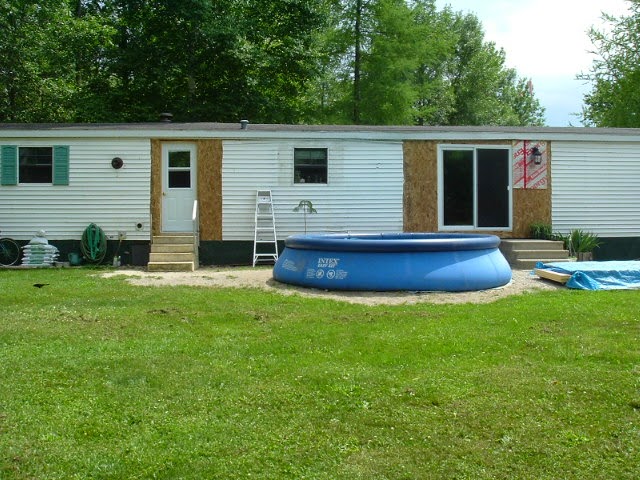 The doors are nice and tight and the living room is much brighter with the patio door.  There was once a 3rd bedroom here, but the walls for that disappeared one day while I was at work.  The room was barely big enough for a bed and Sally (correctly) thought the room would be better as part of the living room.  So she tore most of it out.

Of course it looked pretty ugly like that.  So here we go again tearing off another section of siding. 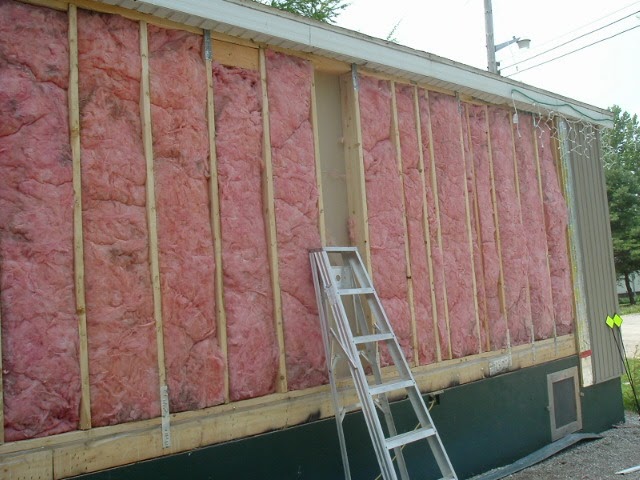 We made sure all the insulation was good, replacing and rearranging it as needed.  Then again with the 7/16 exterior OSB and then a layer of 3/4" exotherm. 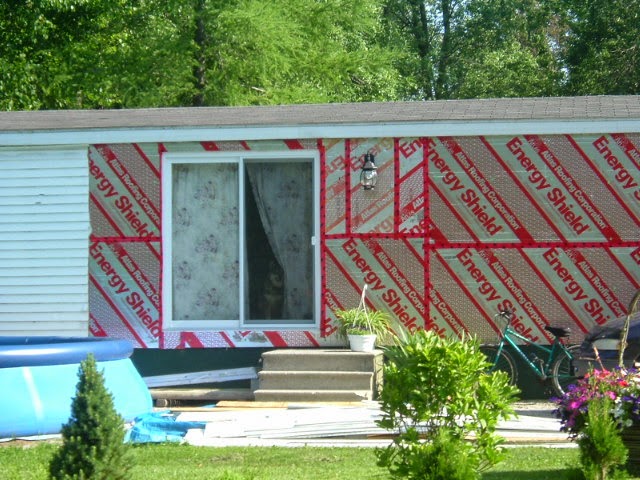 Oh the pool, the pool is great.  We are on our third one.  The first one got replaced, under warantee, for free, when the dog ate it.  Yes, that is true, we were moving the first one from one home to another before we moved here and had drained it.  While we were moving a load, the dog, who chewed on everything when she was young.  Tore the pool up.  Sally called Intex, told them what happened, they asked for a section around the plug so she sent them that and they couriered out a new bag.  Awesome service from Intex!  I would recommend one of these things to anyone.  It is just perfect for 2 people to float around on when it is hot and sunny out.  The dog, well Aggie, who has been in some of the pictures, is gone now.  We like to think our dogs win the puppy lottery when we get them.  They get loved and spoiled and protected and taken care of and eat real home made food.  I will post a few more pics as I come to them.

I seem to be on a bit of a tangent right now, but what the heck, I don't have any particular agenda other than to keep up my journey in wood working/making.  I have found that I am going through my photos now, which are in chronological order with this digression, but it is all part of the trip.  Besides, now that I have started this, I am wanting go through the photos and get the foundation laid.

Thanks for dropping by and listening